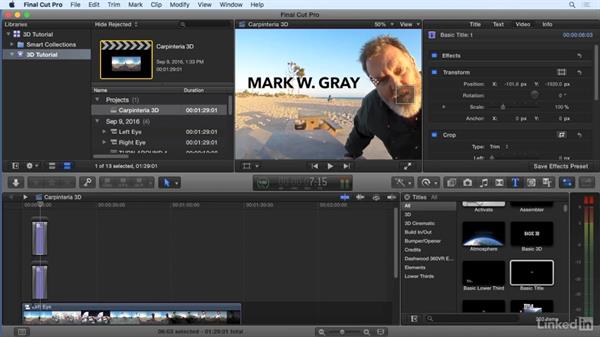 Once you've assembled your footage on the timeline Mark goes through the subtle ways you can edit titles, transitions, and stitches. Adding transitions, effects, and titles can help your 3D video shine. He then shows you how to properly export this footage using 4K settings that will work the best with Google's YouTube viewer system.

- [Instructor] In this video I'm going to cover…a couple of little enhancements you can do to make…your 3D VR project just a little bit more interesting.…First I'm going to add a title,…like here at the beginning where I'm walking up,…I want to add some words right there next to my face.…I'm going to do this just normally…by using the titling tool for step one anyway.…So our just normal,…basic titles here.…I'm going to put my name right here.…

And I'm going to choose a different style to put it in.…I like that.…I want it to stand out against this background here…so I'm going to change it to another color,…probably black, and then I'm going to move it up…and make it a bit smaller.…I'm going to line it up so it looks good…with just one of these images, okay,…with my left eye image.…Let's get in there closer and take a good look at it…and see how it feels.…