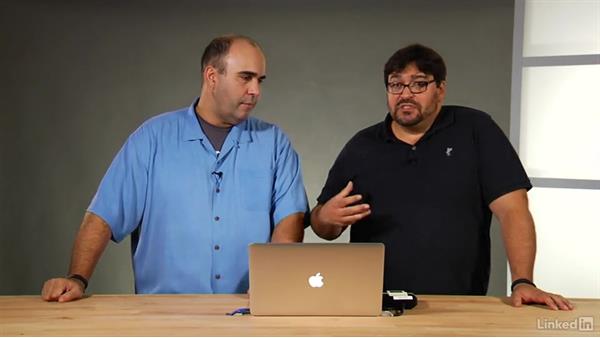 Join Richard Harrington for an in-depth discussion in this video Achieving a film look, part of DSLR Video Tips: Software.

- Hey there, I'm Robert Carmen. - And I'm Rich Harrington. - And welcome back to another episode of DSLR Video Tips. And Rich this week we're going to kind of continue on a motif that we started in a previous episode talking about developing a film look inside of an NLE only using sort of the built in tools. - Yeah, and this is a bit, I don't want to say limiting, because you know, all of these NLE's come with good stuff built in. - For sure. - And core color correction and grading you can do, but I think we often get comfortable using third-party effects because they jump start the process.

- Well, you know, because a lot of times they're dedicated to doing that, right. Whether it's hey, here's 50 looks that you can try out from everything from washes and bleached back passes and all kinds of stuff. When we're dealing with the built in tools a lot of times we have to kind of use our creativity a little bit more- - Yeah. - To be able to do those things. Now, the one thing I think is worth bearing some discussion, and we talked about this in a previous episode, but what do we mean by film look? And I got to tell you Rich, this is kind of an overused and kind of misplaced term in my head. - Yeah. - I just think to me, you know, in my opinion a film look is not having really having anything to do with film these days because nobody's shooting on film for the most part.

You know, all the stocks are gone, all the labs are gone, and traditionally a film look was something that was done in color timing or at least in a photo chemical process, right. We were dipping it in some sort of bath or skipping a stage of the development process. We're not doing that any more with 1's and 0's and pixels on screen. - No, but we are giving a highly stylized look and I think one of the things that's sort of more appropriate is to look at things like magazines or print ads and look for looks or treatments that feel good. - Absolutely, and when client's walk into my suite a lot of the times they're using those words like a wash or a bleach bypass, things that they discovered or they're giving us references like something out of a magazine.

- Yeah. - But it's just kind of a weird thing when we say film. I mean the biggest thing that comes form film for me is really just motion, right, and frame rate. You're going to give yourself sort of a leg up if you shoot all your footage at something like 239a or 24 frames per second versus 30 or 60 frames per second. That's going to give you more sort of hyper realism where one of the things that my mind defines film is kind of that nice smooth kind of soft motion blur that we get on shooting those frame rates. - Yeah, but there are some distinct characteristics like soft blooms or the ability to have some washes.

- [Rob] True. - So I'm going to walk through a couple of things that I often do inside of Premier Pro to give it a look. We'll take a look at two different shots and we'll develop some isolated treatments as well as some global effects.