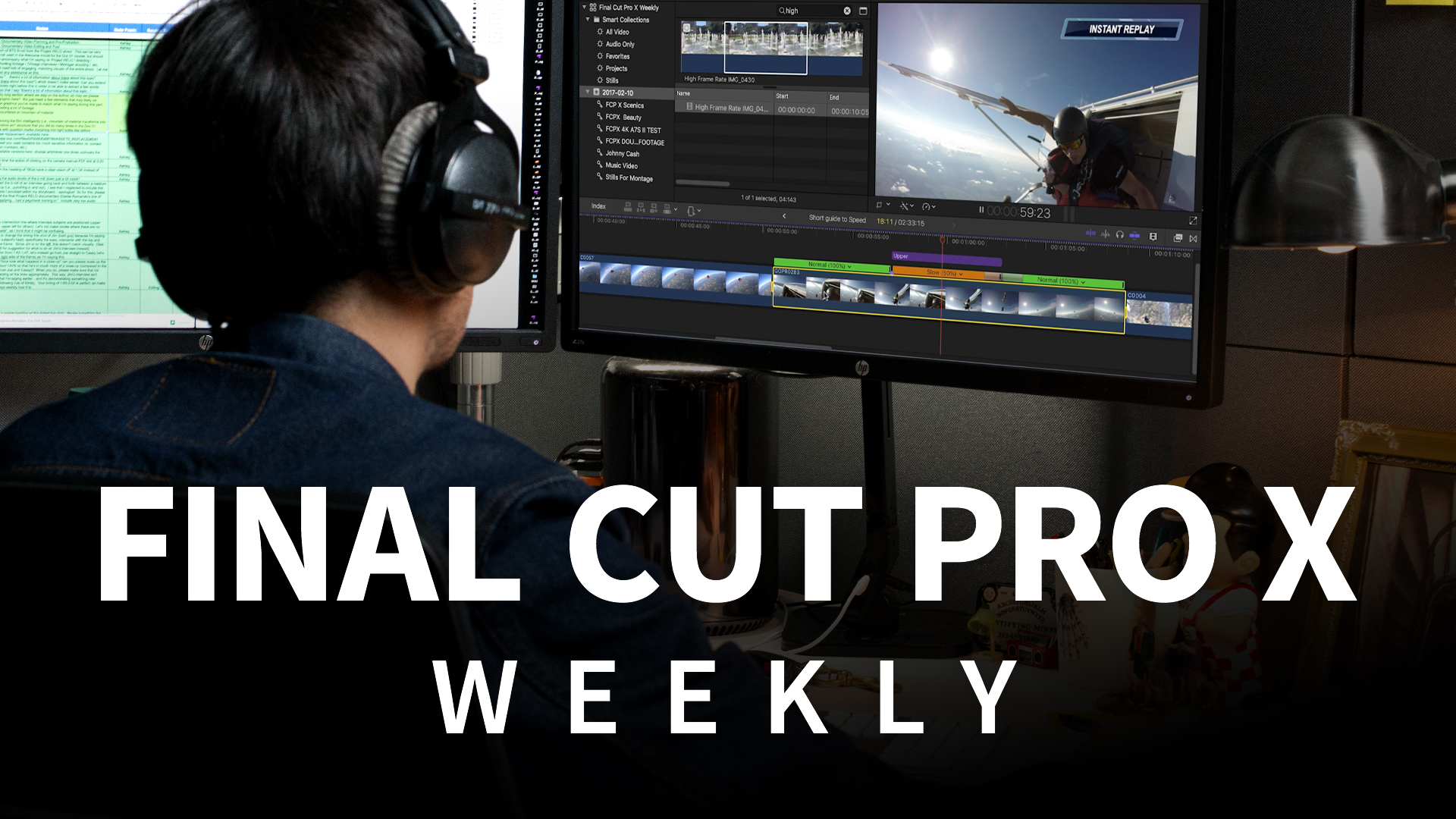 The 360° Patch effect allows for the easy removal of camera rigs in a 360 scene. Join Nick as he takes a look at how to use the parameters for the best end results.

- [Nick] Hi, welcome to Final Cut Pro X Weekly. I'm Nick, and Jeff's not here this week. We're going to take a look at discovering the 360 degree patch effect inside of Final Cut and how we can use this on our 360 videos to remove camera rigs and unwanted objects on static shots. So, we're going to look at applying the 360 patch. We're going to look at understanding the setup mode and how best to use it. As well as how we can change a target and a source inside the patch effect that will be on our 360 video clip.

Let's hop inside of Final Cut Pro. I have a 360 timeline ready and a 360 clip inside that timeline. Now, you might know, if you've worked with 360 video before, to use 360 video and have this navigate across your scene to see everything that's in your image. While it's great to find out where various things lie across this spherical footage, this isn't going to work so well inside the patch effect because of how the setup mode works. So, I encourage you to just to close the 360 viewer if it is open, and you're using it for the first time to get the most out of the patch effect.

We can go into our effects browser. And if we go to our 360 category at the very top you're going to see this 360 patch effect. I'm just going to take that and drag it over to the clip. I'm going to use a handy shortcut here, control + cmd + 4, to get a bigger view of the inspector. I'm also for the time being going to close down my effects browser. It just allows me to see all the commands for the 360 patch. The first thing that you want to do when using this effect is enter into setup mode.

And what it's doing is choosing a patch region. It's assuming that the camera that's in your spherical scene happens to be at the bottom of your shot, or what's commonly referred to as the nadir. You can, of course, change that to a different view. The front, back, left or right camera can also be chosen depending on if it's in a different place. But, for now the bottom is appropriate. With the clip selected, notice that you also get some onscreen controls in the viewer. And what we can do is choose essentially what we're targeting, as well as the area where we're choosing a, essentially clone, or patch from.

If your clip is not selected in the timeline and you're effect is not selected these patch controls will go away. So, do make sure that your 360 patch effect is selected in order to this in the viewer. I'm going to move my source position in my setup mode to choose an area to clone from. So, I want to choose this rock detail right here and while this region is too big for the source, I can, of course, choose to make it a lot smaller.

Now, this doesn't do the actual target region justice, but one command under the target happens to be scale. And if you increase the scale, we can essentially take a very tiny patch and make it much larger. Of course, this is going to depend on what type of part of the image you are choosing to patch from. So, I might make this slightly bigger, the actual source control and choose an area just a little bit over here to the right.

And I'm just going to then move also my target control and slightly make the target scale a little bit smaller. I've been able to obscure most of my camera, and I'm just going to try to get the majority of it, minus this little section over here. But that's looking pretty good. Now, depending on the region that you are adding the target to, keep in mind you can do a few things. Such as, if you go down to target scale, you can actually separate your X and Y scale.

And for certain things you can, of course, make things larger or smaller in case that the target that you want to apply to doesn't happen to be the exact size that I'm showing you here in this example. Other really cool things are your ability to actually flip your source. So, you can take the area that you're choosing to patch with and you can flip the way that it looks when you're applying it. So we can, of course, flip that patch horizontally, vertically or actually flipping it both ways.

And this could create or be very helpful in certain situations where we're trying to remove the camera as well as make the area where the camera was as unnoticeable as possible. Once your done with this we can leave setup mode. And we can see here that we've done a pretty good job there with the patch. Just to double check after you've exited setup mode, you can bring up your 360 viewer again. Just to get some more real estate, I'll close my browser. And I can see that region without any of the setup controls, and how that looks in the scene.

If you are, you have the ability to add multiple 360 patch effects. But for simplicity purposes, I do recommend that you take your video clip and wanted to add another patch and basically turn it into a compound clip, by going to the file menu. I'll call this Patch One, and now that this is done, it just makes it a lot easier for me to go into my effects browser and apply a 360 patch without accidentally selecting the previous patch effect that was above.

And I can now enter into setup mode and then choose a full other region to patch if this was necessary. And get rid of any other unwanted camera materials. In this case, I don't need to add another patch effect so I'm just going to undo my, the last few steps until I get rid of the compound clip. Now we can see this clip and how that patch job came out. So, hopefully this gave you some insight on how you can use the patch effect on 360 videos to move your camera rigs.

Thanks for tuning in to Final Cut Pro Weekly, I'm Nick.