Using the power of suggestion 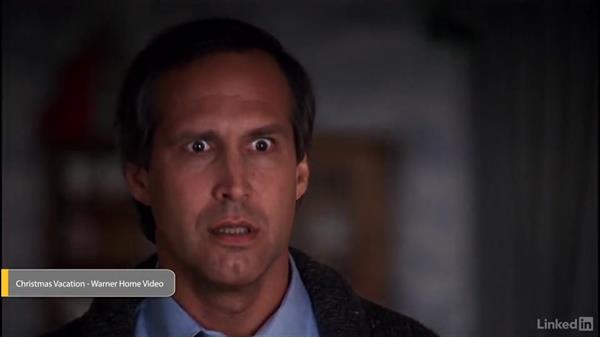 The power of suggestion is used by movie directors in filmmaking to suggest ideas to an audience that might not be accurate. When directing films, filmmakers can use cinematic sleight of hand to convince audiences that the set is bigger than it is, or that the world is bigger than it seems, or that a certain truth is a reality, only to surprise the audience later in the film.

- It's important to remember that visual storytelling…is about creating illusions for the audience.…Perhaps the most common illusion in film…is that characters actually had conversations in real time,…when in reality we stitch together conversations…from pieces of multiple takes,…perhaps even filmed days or weeks apart.…Using the power of suggestion,…filmmakers can convince the audience of a false reality.…We see this all the time in movies and TV shows…that are set in one city but filmed in another,…like how iZombie is set in Seattle…but actually films in nearby Vancouver, BC,…or how The Killing was set in Seattle but shot in Vancouver,…or how Grey's Anatomy and Frasier…were set in Seattle but, yeah, you get the picture.…

But note how they create the illusion…that they film in Seattle.…They show stock footage and establishing shots in Seattle…and they talk about Seattle…in their conversations, so we believe them.…Stock video can really be a great tool.…In a film I made called When Harry Made Sally,…I got a few shots of me with these cheap thrift store…

Video: Using the power of suggestion