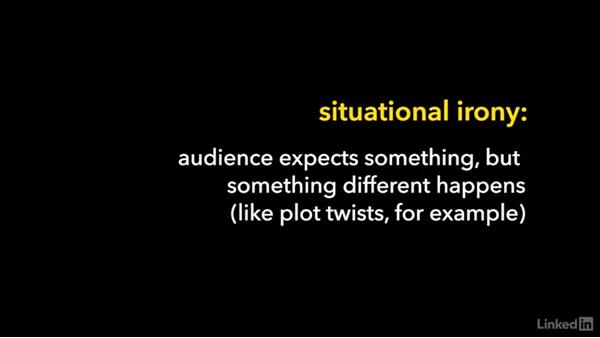 - Part of being a good storyteller…is being able to recognize and quantify…familiar storytelling tools.…In this journal, we're going to look at…two common tricks in particular,…dramatic irony and situational irony.…Dramatic irony is when the audience knows something…that the characters don't.…I once made another short film called Incognita…that has quick scene of dramatic irony.…As our heroin looks around,…she reveals someone in the background…that intends her harm.…We see him, but she doesn't,…this is dramatic irony.…Hitchcock was a master of dramatic irony…and used it to create tension in a lot of his movies.…

In Rope, for example,…some guys have killed one of their friends,…hid his body in this table,…and then had a party.…The guest at the party don't know…what's hidden beneath the serving tray,…but we do.…What adds to the tension is that Farley Granger's character,…Phillip, is terrified of getting caught.…In The Assurance we had a little bit of dramatic irony,…but I don't think it ended up being very clear…in the final version of the film.…