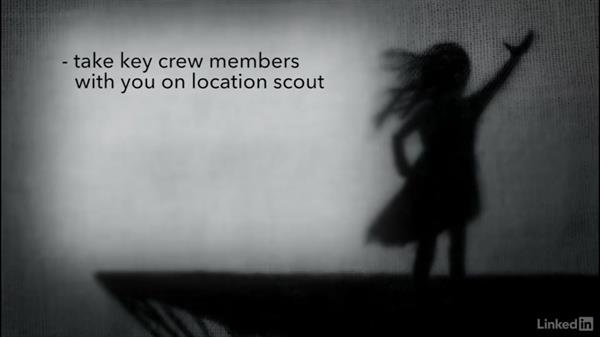 Scouting movie locations is an important part of pre-production, and a great way for film directors to find good shooting locations for film. Locations create a distinct atmosphere and environment in a film. When doing a location scout, it's important to bring key crew members with you, such as the director of photography and the sound mixer, so they can help you make the final location decisions.

- Locations are a huge part of the…production value of your film,…and also go a long way in setting the mood of your film.…As we looked at in series three,…I think the location we got for The Assurance…was one of the best things to happen to the film.…So, during pre-production, you'll definitely want…to be a part of the scouting process for the locations.…A location scout is when you go to…potential shooting locations…and evaluate if there'll be a fit or not.…If possible, I recommend taking some…extra crew with you as well.…Your cinematographer and sound mixer can be helpful…as an extra set of eyes and ears about the…unique visual and auditory properties of the location.…

It might be exactly what you're looking for…in terms of geography, but maybe the sound mixer…notices some potential audio issues that…would've been disastrous to be unaware of until production.…Also, remember to not look for what is there,…but what you can make the audience believe is there.…The council scene actually takes place…in a covered picnic area, but we set up some C-stands,…