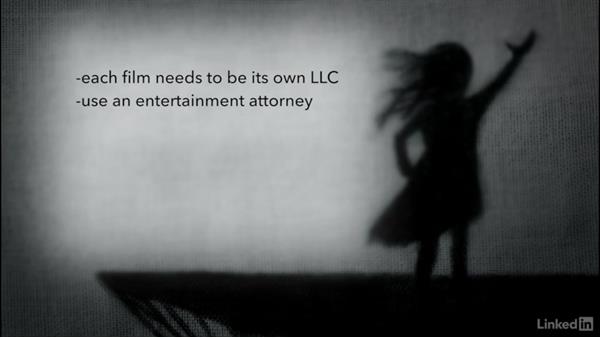 The legal protection that you need on a short film is much different than the type of lawyer you need for feature film production. In this brief tutorial, we'll look at the types of contracts, business entities, and insurance - including errors and omissions insurance - that you will need if you are producing a feature film.

- In the last chapter we talked about…legal obligations that arise…when you produce a short film.…But everything is significantly…more risky with feature films…because there's so much more money involved.…If there's a contract dispute on a short film,…for example, it's probably not going to go to court.…There's just not that much money to sue over.…But when you have a budget…that's in the millions of dollars,…like even low budget features have,…then that becomes something…worth going to court over if somebody…gets cheated.…In the last chapter I also mentioned…that I created The Assurance with my company,…Movies & Computers, which is a…limited liability company…often abbreviated as LLC.…

But in the world of features…each film needs to be its own LLC.…So it's like the movie is a business.…This is done not just for the legal protection…of the producers and those involved…with the film,…but it's also a standard practice…when turning the film over to distributors.…They want to know that all the…legal rights for the film are…