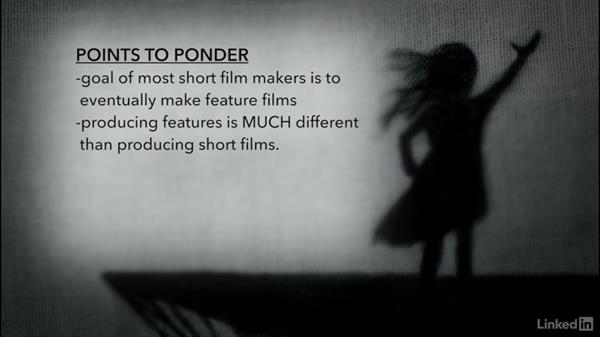 - The point of all these training courses is…to obviously help you create a short film.…But most short films are created with the intent…to move on to creating feature films.…So, in this chapter, I thought we'd take…just a very perfunctory glance…at what it's like to produce a feature film.…For most jobs on a short film,…from cinematography to editing, color,…visual effects, composing a soundtrack, whatever,…most jobs are almost exactly the same…on short films as they are on feature films.…Once you got the skill,…the length of the film doesn't matter,…whether it's three minutes or 103 minutes.…

But producing short films is almost nothing like…producing feature films.…I mean the overall responsibilities are…in the same neck of the woods.…You're gonna start and finish the film…and market it and get money, and so forth,…but it's a completely different story with features.…And why is it so different?…Money. (laughing)…Because of the money or the potential of the money involved,…it changes everything.…I mean when was the last time that you paid…