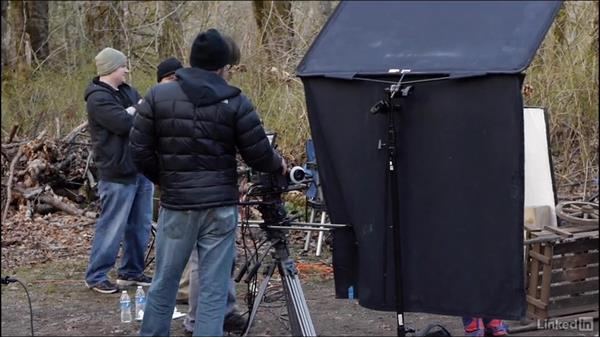 A look at the other next course in the Creating a Short Film training series. Course number 6 answers the question what is it like to work on a film set, as we dig into film production. This series of online filmmaking tutorials will examine various crew positions on a film crew and what they do, as well as a special effects makeup tutorial.

- We've spent the first five courses of this training series…essentially looking at how to prepare for production.…Well, in the next training course in this series,…we're going to dig in and look closely…at what it's like to be on set.…We'll look at all the crew positions that we have…in The Assurance and what they do.…We'll show you the workflow on set, how you go from…shot to shot through the schedule,…but also the process filmmakers go through before each shot…with the slate and that whole thing.…There's also an established etiquette…for behavior on a film set and terminology that we use,…so we'll bring you up to speed so that you can feel…comfortable with what's expected of you…when you walk on set.…

We'll look more in depth at the shooting schedule…of The Assurance and some of the hiccups we had…and how we tackled weather challenges and other obstacles.…We'll talk about how to take care of your crew…by keeping them safe and some tips on how to feed them…very well for very cheap, and we'll also have…a special guest trainer, my wife Heather,…