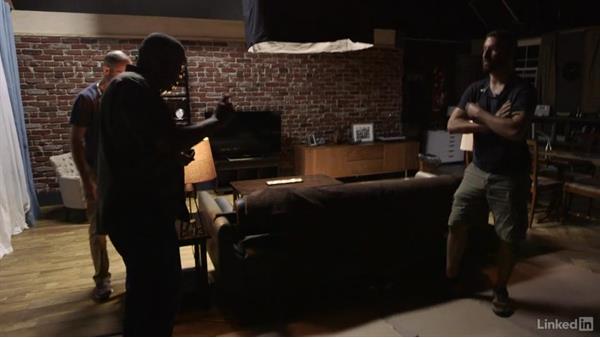 - We're going to talk about practical lighting. Practical lights are lights that you can actually see in the scene. Now sometimes, there's lighting that's called for in the script, but most of the time the practical lights are lights that are part of the design, of the look of the movie. But one of the things we want to be careful about is that this is both design as well as engineering. So that we don't have lights that are not practical, that actually can't be lit, that perhaps operate on a European system or somehow or another are not usable on our sets as actual light that can actually create light on the set.

So J.D., can you do me a favor, can you take that, the ambiance down a little bit? And then we're going to talk about how we're using these. So Greg, can you tell me about what we've got available here? - Sure, we've got two side table lamps, that I've worked with J.D. on having the availability of you having them on dimmers. - So can you show us that, J.D.? - Yeah, built right here, we have two dimmers. One set for each of these of these practicals. That way was can raise and lower them. - Yes, so one of the things we want to make sure that we have the ability to, as J.D. said, to be able to change the light levels, so that it's appropriate for the scene.

But also, sometimes we'll use brighter bulbs than the lamp is actually capable of using safely. So what we'll do, is we'll keep the electrical level low on them, because we want them warmer. And that's one of the things we're doing with the design of this scene, so that these are warm, and they contrast with the cool light that we're creating in the background here. OK, so Greg can you show us what else we've got? - Yeah, we've got a couple other practical lamps on set. We've got this floor lamp here, and this one's also on a dimmer along the backside of the set.

- OK, great. - And then we have a few other practicals on this side of the set. We've got on just over the record player. - OK, great. - And one just over her in this little nook, giving it a little bit of life. - OK, that's great, that's great. So we're nowhere near lit, but I like to make sure that we have practicals on the set before we do the blocking. The idea of that is that helps the actors to see, and the director to see, how we'll probably light this scene, and it encourages them to tailor their movement around the light that's already here.

OK? So we're going to take a look at blocking the scene next. 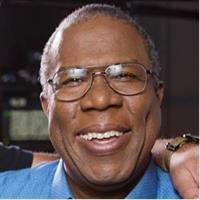 11/21/2016
The Cinematography series with ASC cinematographer and professor Bill Dill covers what you need to know to shoot a modern motion picture and tell stories in the most powerful way possible. Part 2 is all about executing your creative ideas: putting it all together on set and delivering the footage to post for assembly into a complete, coherent, and compelling story. These lessons cover every phase of a shoot, in a way that scales from a very simple, very small crew all the way up to a professional production. Bill introduces techniques for blocking actors, lighting the set, rehearsing, and shooting from a variety of angles. He discusses the importance of preproduction, including preparing detailed storyboards and shot lists, and how the types of cameras you have will impact the way you hand off and edit footage. Finally, get media management tips for handling your files so they flow easily through post.
Topics include: