Looking at the other courses 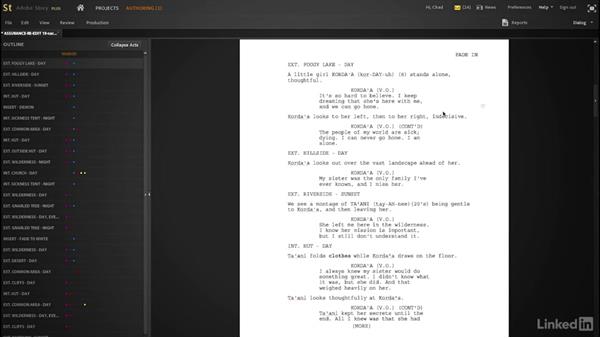 A look at the other 13 courses in the Creating a Short Film training courses. Part of this is a preview of the next course in the series, which looks at screenwriting, including how to format a screenplay, how to tell a good story, and how to identify key story beats. Some of the other courses are previewed, including visual effects, color, film score composing, and more.

- This training series on producing was just the first…in a massive collection of courses…about how we made our short film, The Assurance.…In the next training series,…we're going to look in-depth at story telling.…What makes a story, and how do you communicate ideas…visually to an audience?…As you'll see, this was a challenge on our film.…We had several massive rewrites,…and in post-production, we decided…to scrap the entire script and start over…from a completely different vantage point.…We'll look at how to write a screenplay,…including the weird formatting rules…that are standard for all scripts,…both amateur and professional.…

And that's just the beginning.…Through the rest of these courses,…we'll look at how we took that script to the screen…and how we shot our film,…how we auditioned actors,…how we edited it, how we added visual effects…and color and composed a soundtrack,…and everything else we did for this film.…It will be a unique and fascinating look…into the workings of a film from start to finish…and will be a great education.…

Video: Looking at the other courses