How did you prepare to play Ta'ani? 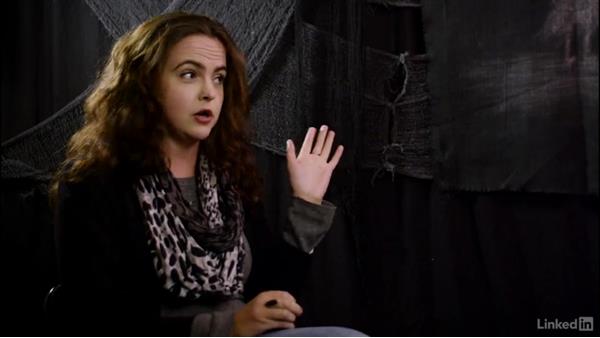 This video tutorial contains an interview with actress Eva Jane, who played the character of Ta'ani in The Assurance short film. Here, we get insight into the actor's process and how actors prepare for roles in film and theater. Eva Jane discusses how to discover the dramatic spine of the character, and how that helps in the acting performance.

- One of the things I did is, um, well I read through it, probly like a bunch of times, um, just trying to understand her as much as I could, and then, you know you kinda figure out like overall like, what's her overall objective, you know, in the film, you know, and then in this specific scene, and things that are important to her and things that she has gone through and in doing this same study I kind of wanted to kinda bring her, just kinda downplay her a little bit because she, with her sister, with everything that she did, she spent so much time trying not to be noticed.

You know, like she didn't want to be noticed, because she had this huge secret that people could not find out about her. So if she could, you know, walk through a crowd and nobody could see her, then that would be perfect. You know, so, you know, and like she has, you know, she has a power and she's very like strong woman, but she needs, but having that, that strength that she needed to kind of like keep subdued, because of what it could cost her, I think was, was really, really fun to play with.

Thankfully with Ta'ani, um, I really like the way she was written so I understood her a lot, you know, so, um, I didn't have as many like questions about figuring her out as I might have because I very much understood her character, also 'cause you and I talked about the whole concept and her before we started filming so by the time we got there I was like all right I totally got this girl.

Video: How did you prepare to play Ta'ani?