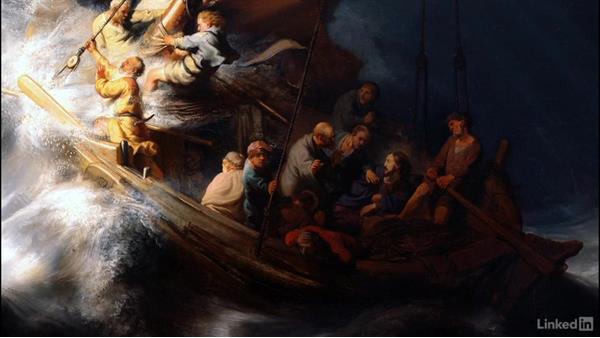 The framing of a shot refers to how the elements are arranged in the frame. In this tutorial on framing shots, basic concepts of framing and composition are given, including studying basic cinematography principles, such as contrast and eye lines. A Rembrandt painting is used as an example, as we look at controlling the eye of the viewer, and telling a visual story with lights and design.

- One of the ways to make your films feel polished…and professional is to be intentional about the framing.…This refers to where objects are placed in the scene.…An example of this that I like in Assurance…is in the beginning of the hut scene.…The original version of the film, Ta'ani was overwhelmed…with responsibility of both preserving Korda'a…and sending her on her very dangerous mission.…And I wanted to represent this conflict visually.…So I used a wide angle lens and put Korda'a…close to the camera and Ta'ani back in the corner.…This framing makes it seem like Korda'a's an animal…consuming Ta'ani.…

I guess more accurately that Ta'ani was absolutely consumed…with what to do about Korda'a.…We'll talk more about balance and composition…in the cinematography course but where you put things…in the frame determines how visual weight is distributed.…Often the frame is divided into imaginary thirds.…The subject is put on one side…and this creates a balance composition.…You can see this clearly in…the opening shot of the Assurance.…