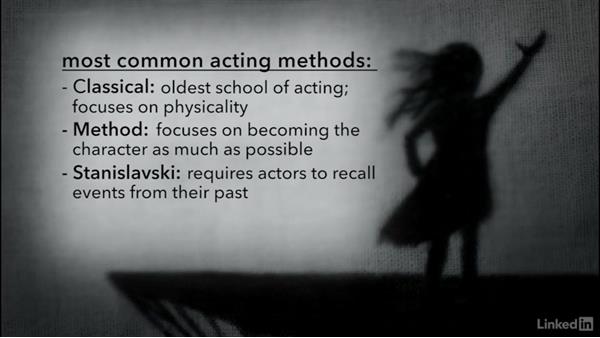 The most widely used and practiced acting schools are explained here. This includes Classical acting, which is commonly found in Europe and in theatrical acting. Method acting is a school of acting in which actors try to become the character as much as possible, even off camera. Stanislavsky and Meisner are two other acting teachers and schools of acting explored in this tutorial.

- As we talked about in the last tutorial,…acting must begin from feelings on the inside,…not from behaviors on the outside.…But, there are many different thoughts about how to do this.…In this tutorial, we're gonna look at…the four main schools of thought when it comes to acting.…The first is called Classical Acting,…this tends to focus more on examining the script,…but also on physicality and controlling the body.…From my experience, classical acting…is more commonly seen in British actors.…It's also more common in theater,…as it tends to focus more on physical movement.…Another school of thought that gets a lot of publicity,…is that of Method Acting.…

Method Acting is the idea that actors…must try to become the character as much as possible.…This is clearly seen in the dramatic weight loss…Christian Bale endured for his role in The Machinist.…Method actors are known for staying in character…during the entire production, even when cameras…aren't rolling, which can, you know,…sometimes frustrate other cast and crew.…