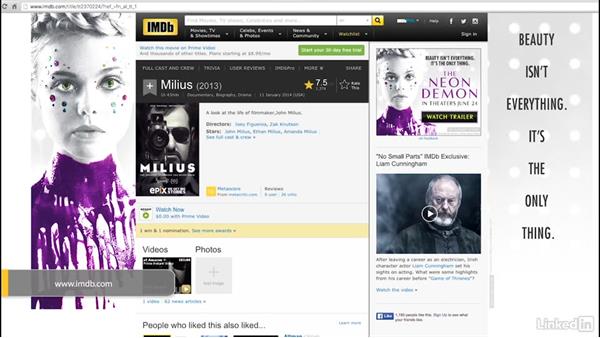 Resources are given in this video filmmaking tutorial that will help students become better film directors, including popular filmmaking books, filmmaking audiobooks, and online filmmaking tutorials. Also discussed are documentaries about filmmaking, enlightening TV shows about movies and the process of making movies.

- In this movie, I'm going to share with you…some of the things that I think have really helped me…as a director.…Perhaps one of my favorite resources right now…is the special features that come on some DVD…and blu ray discs.…In these, you can not only pull back the curtain…and see how certain shots and scenes were done,…but also you get to hear why certain creative choices…were made by writers, directors,…visual effect supervisors, editors, and more.…It's extremely insightful.…There are few books that I have loved,…John Badham's book, John Badham On Directing is great.…I have the audio book version,…read by the very accomplished author,…and it's full of all kinds of great ideas…about filmmaking and directing.…

I'm also a huge fan of Sidney Lumet's book Making Movies.…It's more of a big picture overview of filmmaking…from his decades of experience…making Hollywood blockbusters,…but there are great insights there about filmmaking as well.…At the beginning of this series,…I mentioned the book Moviemakers' Master Class,…