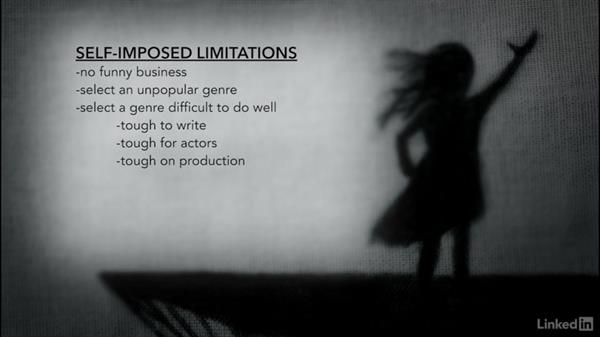 In creating The Assurance for the Creating a Short Film training series, conditions were artificially changed to create more challenges than we would've otherwise had. These include using the genre of a fantasy film, because this adds a lot of filmmaking challenges to the process, and shows a lot of helpful filmmaking problem solving to make the best training possible.

- Our short film, The Assurance,…was created specifically for this…training series on Lynda.com.…So in creating the film I had two choices,…I could do what I've always done,…put all my familiar tricks and make a pretty decent movie.…That would definitely help make me look…like more of the expert on the subject.…But I found that I actually learn way more on film projects…that don't go according to plan,…but we never get to see that.…We never get to see the first drafts,…the rehearsals, the rough cuts.…All we see is the final polished versions of movies.…So I decided to put some limitations…for myself on this films that would make…it impossible to do well and while this…was kind of tough on my pride,…I knew that it would make much better training.…

So, what were the limitations I put on myself?…Well, pretty much everything I've ever done…has been comedy, that's where I feel comfortable.…In my personal life, in my career, comedy.…So, for this project I knew that comedy…was then out of the question.…I just couldn't use it and I had to choose…