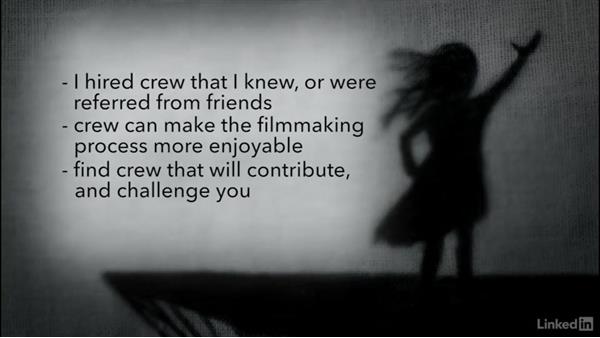 As an independent film director on a small film, you might have a voice in selecting the members of your film crew. Selecting the best fit for key crew members, such as director of photography or cinematographer, assistant director or 1st AD, art director, production designer, and more is important to maintaining a positive work environment on a film set.

- On big budget feature films, the director might not be involved in the hiring of the crew. But if you are a new director working on your own low budget short film, it's possible that you'll be hiring some of the crew yourself. I hired the crew on The Assurance, and honestly I'm glad I did. With rare exception, I knew all of the crew of The Assurance, and I'd worked with them on other projects before we started production. Now this is important to me because I knew that these people were people that I could trust and also enjoy working with. I also knew that these are professionals, that really know what they're doing and love it.

To me, I view choosing the crew almost like casting the actors. In the same way, a great cast can bring everything to life in front of the camera, a great crew can bring everything to life happening behind it, which makes the whole process so much more enjoyable. I recommend choosing people that challenge you, and they communicate well. People that strike a balance between having strong opinions, but also still really open to change. One of my biggest regrets is that I didn't have the time to meet with the crew before production. I think this would have helped production go so much more smoothly, and I also think that it would have translated to getting better footage at the end.

In those meetings, you can discuss big picture scheduling and creative ideas. You got blocking rehearsals, collaborate and get ideas how to shoot certain scenes and so on. I think crews feel a lot more ownership in a project when they show up on set and know the plan and that they contributed to it. We talked in series three about how to find your crew, and we'll look in the next training series, series six, about what these crew members do. But for now, just know how important the expertise and attitude of your crew is when making your film.