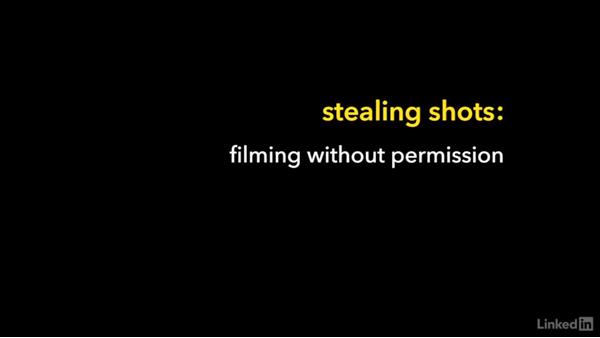 Cheating shots and stealing shots are two unrelated techniques to help filmmakers get the shot they need to tell their stories. Cheating shots is when lights, actors or other elements are adjusted after they've already been shot in order to create a better shot. Stealing shots refers to quickly and secretly getting shots at a location without film permits, usually with a skeleton crew.

- Frequently in the world of filmmaking…you'll hear about cheating shots and stealing shots.…While these two concepts aren't really related…and aren't nearly as immoral as they sound,…both can help you get better shots.…Before we steal shots, let's look at how to cheat.…Usually, after shooting a master shot of the entire scene,…we go in tighter for reverses or close-ups,…and often when we go in closer,…things don't look quite right.…Characters might be too close together…or the light might not be good enough…or we might want to pull characters…farther away from the background…in order to create more separation.…

This is what is referred to as cheating in filmmaking.…When filming the scene where Korda'a gets discovered,…we created a POV, or point of view, shot…so we could give the audience a sense of…how intimidating it would be to be this little girl…and have all these big adults just kind of…coming and swarming at you.…In reality, Natty wasn't that much shorter than everyone,…as you can see here.…So we cheated the height of the POV shot…