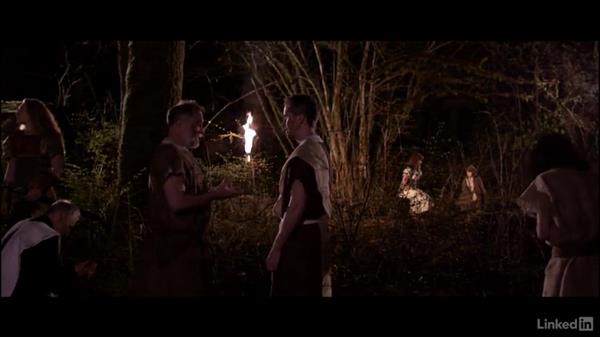 In television and filmmaking, it's often said that the screen that is used to view the video is like a fourth wall. When the illusion of cinema is broken, such as when an actor looks directly into the camera lens, it is said this is breaking the fourth wall. Occasionally, this is done intentionally as characters connect with the audience. Generally breaking the 4th wall is something to avoid.

- [Voiceover] The screen that we use to watch movies…like on TV sets or in a theater,…is often referred to as the fourth wall.…As if the characters we're watching…are all kind of putting on a play…inside of this imaginary box.…So when characters make eye contact with the camera,…this is referred to as breaking the fourth wall…because it destroys the illusion that the real story…is happening before our eyes.…And we're reminded of cameras and actors and filmmakers…and fiction of it all.…It can be jarring to an audience, even if the actor…only looked at the camera for a split second.…

It's so intense that looking into the lens…is also referred to as spiking the camera.…Child actors are notorious for spiking the camera.…And there's even an instance of breaking the fourth wall…that we had to use in The Assurance.…I needed an establishing shot of the night scene…but the only ones we shot were from the original story…where the townspeople were all gathered around and stuff.…And I wanted a shot that made it seem that these…