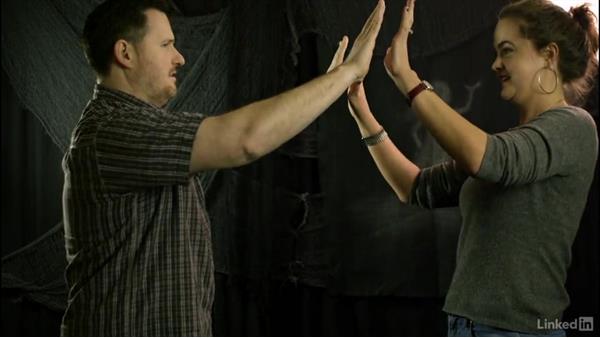 To get practice experiencing the sensation of honest and believable acting, actors will often perform acting exercises. Some common acting exercises are demonstrated in this video tutorial. These exercises are not meant for on set work, but rather are for acting classes and acting rehearsals, to help actors practice listening to their scene partners.

- In conjunction with warming up the body,…actors often do exercises to prepare them…for acting with a scene partner.…These are usually done in acting classes rather than on set,…but I could also see how these could…be helpful in rehearsals,…especially with actors that are maybe skittish…or less experienced.…Essentially, these exercises get two people…to work together, to both respond and listen for a response.…Eva and I shared our favorites for this training.…Eva's exercise was a mirror exercise…where we put up our hands together.…She would move her hands and I would follow.…

Then I took a turn leading while she followed.…Then it gets interesting.…With our hands up, our goal is to still mirror one another,…but no one is the leader.…We both try to move like we're one person.…My exercise looked different, but felt similar.…One person is blindfolded…and the other person kind of introduces them to the world.…The person being the guide might get them to feel textures…or sit down or move around the room.…These are great exercises because you practice leading,…