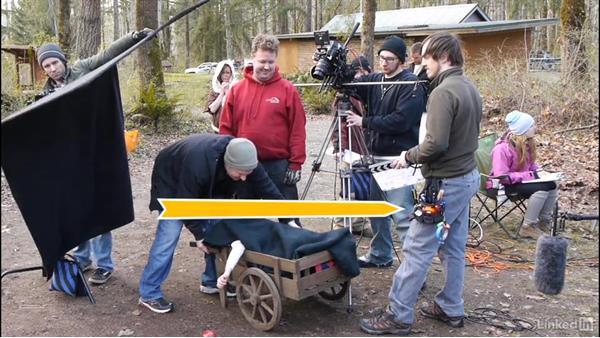 The first assistant cameraperson or 1st AC is the person on a film set responsible for pulling focus. For this reason, the first AC is often called the focus puller. The first assistant camera on a film crew works under the direction of the director of photographer, and will often assist with camera tech duties, such as lens changes. On smaller sets, the 1st AC might operate the slate.

- The first AC, not to be confused with first AD,…is the the first assistant cameraperson.…Their primary job is to maintain correct focus,…or in other words to pull focus.…Because of this, the first AC is sometimes called…the focus puller.…Our first AC was Marco Scaringi.…I met Marco when I was DP…on Bry Troyer's short film I Love You Puppet Man.…Marco was an absolute joy to work with…and he always comes over-prepared…with everything he might need for the job.…I mean, look at all that stuff on his belt.…I don't even know what half that stuff is for.…He's amazing.…

Because we didn't have a frequent need…for a lot of focus pulling, Marco also took care…of a lot of our camera tech, changing lenses,…moving the camera gear around.…You know, that type of thing.…Along with our incredible camera operator, Ty Huffer,…they made up our entire camera department.…On our production, we didn't have a second camera assistant,…and that's the person that usually handles slating shots,…so Marco handled that job as well most of the time.…