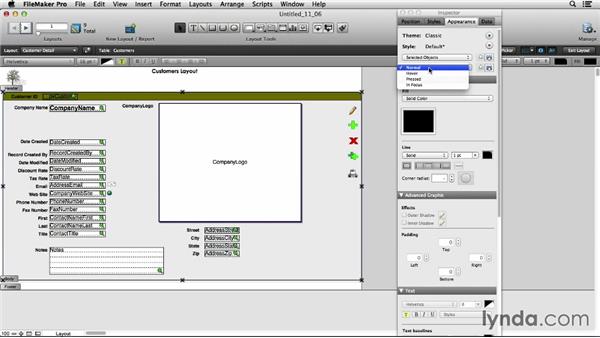 In previous movies, we've looked at how you can apply formatting to objects on your layout. In this movie, I'm going to show you how the objects in your layout can have different states and how you can apply different formatting to each individual state. In Layout Mode, you can apply specific attributes to different objects on screen. Each of the objects has different states as you can see by selecting the company logo, you navigate over to your Inspector in your Appearance tab. If you look on the top of the inspector, you'll see these little drop-downs here.

What these drop-downs are tells me what's selected, first of all, and if it has different properties - in this case the container only has one property. But down here below, is something that's called a list of states. So for example, a field can have a Normal state, a Hover state, a Pressed and an In Focus state. Let's take a look at what those are by actually applying different formating to each state. So first of all Normal we'll just apply, let's say we've got a drop shadow to it. We'll say apply some lines. It gives a little purple effect, just so we know what normal looks like.

Now we have Hover. Hover's going to have a different look to it. It's going to add to what the Normal state is. Now Pressed, let's just apply a different color to it completely. And In Focus, let's give that pink. These are all pretty dramatic and I wouldn't advise designing your layout this way, but let's take a look at how these look as we apply different states. Now, field has these four different states. First of all, you'll notice when I hover over it, that's one of the states; it takes on that one yellow color. So, this is a good way to apply some Hover state formatting to things like buttons or clickable things on screen.

Notice when I click on this, which is what Pressed is called, I'm actually seeing a different purple view. So, you can get something that gets kind of a tactile pressed look. But now that I've selected it and it's In Focus, you see that now there's even the fourth state. So In Focus is the pink, Pressed is the purple, Hover is the yellow and hover only occurs when it's not already In Focus. So here I'm hovering, but when it's In Focus you can't hover over that. Now back in Layout Mode, you'll notice that anything you select has its own states.

All the field objects have their own states, but graphics only have one state, for example. Boxes and things that you've drawn also have the same states as fields, but interestingly enough in FileMaker 13, you can apply states to layout objects. Let's take a look over here in Customers and Customer List, and we've got his body part here. Notice that when I select the body part, we see Body selected here. And then I have got three different states. We've got Primary, Alternate, and Active. These are new options in FileMaker 13.

So Primary for the body part is what you seen when you're viewing it in form view or list view or any related records that are displayed in rows of a portal. Setting Primary state fills the background of this body part or all the rows in the portal. So Primary really the best way to look at this, means that this is the normal state like you're used to in some other objects. So here for example, if I applied a background fill and went into Browse Mode, everything in the body gets that same background fill. Back in Layout Mode, let's say that I change that back to white, and now I'm going to instead choose the Alternate state.

So let's pick a different color and then invoke my color wheel. So now in Layout Mode, it looks like the body is completely highlighted yellow. But I save that in Browse Mode, and we see that it's really alternating from row to row. Yellow might be a little extreme, but it can't hurt to have alternating rows making your forms and printable objects a little bit easier to read. But the one that I'm kind of a fan of is something that's also new in 13. It's the ability to manage the active state. So here the Alternate state is yellow, let's actually clear that out.

And with the body still selected let's go to Active state, and here we're just going to highlight that yellow, there we go. So now in Browse Mode, I hit Save, and you'll notice that only one record at a time has that highlight. That's the record that's activated. So now you don't actually need this indicator over here which you can turn off by going into the Layout Setup. I would recommend this on all of your list view, so your users can see which record is active by which one is highlighted. This also works on portals which we're going to get to in the final chapter of this title.

FileMaker allows you to specify attributes indicating the state of an object when viewed in Browse Mode. And that gives database users visual feedback for actions that they take, also allowing them to recognize the Active state of certain layout objects, thus making your layouts appear more intuitive and interactive.