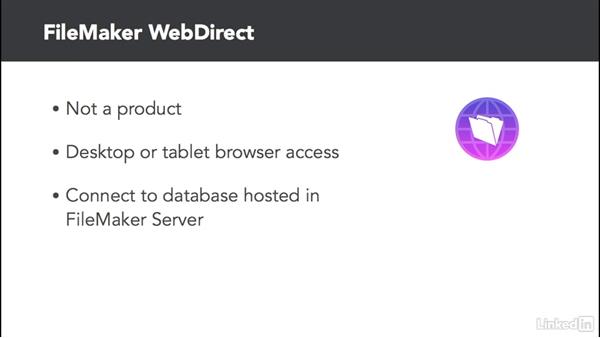 - [Voiceover] Before we get started with our exercises, I'd like to take a moment to introduce you to all the different products in the FileMaker 15 platform. The FileMaker 15 platform is a set of tools and technologies that enable you to create, deploy and manage custom business apps. It also allows you to modify them as your needs change. You can create custom apps that run on the iPad, iPhone, Mac and Windows Desktops, and even in a web browser. So, the first product is FileMaker Pro 15. It's the standard user version of FileMaker Pro, that has desktop software for either Mac or Windows users, and allows you to design and build FileMaker custom apps, and then also even modify custom apps that were built by others, and basically it will allow you to do everything that we're going to be talking about in this course.

The next product is FileMaker Pro 15 Advanced. This has all the functionality of FileMaker Pro 15, but it also has some additional tools that developers find useful like script debuggers. It also allows you to create customized menus and has some other features that those that are using FileMaker on a regular basis to develop apps find useful. Now, it might cost a little bit more but the additional tools in FileMaker Pro Advanced are an essential part of a developer's toolkit, making it a must-have product for those who will be creating or maintaining in their own FileMaker custom apps.

FileMaker Server 15 is an application that gets installed on a dedicated server machine or even up to three different machines, and it's used to be able to share all of the different files that you create in FileMaker so that many users can access them at the same time, and hosted custom apps can be used by hundreds of people at the same time with the data shared securely between the server and the users. FileMaker Server can also allow access to FileMaker apps via FileMaker WebDirect, which provides access through a user's web browser, Or you can even publish your databases to the web using FileMaker PHP.

FileMaker Server also lets other users access your data as raw XML, or you can allow FileMaker to the be the host of any kind of ODBC or JDBC connectivity. FileMaker also has a very exciting option for sharing your databases via any iOS device called FileMaker Go. The app can be downloaded for free on the iTunes store, and will allow users to access FileMaker custom apps on iOS devices. This includes any Apple device, including iPads, iPhones and even iPod Touches, and it provides access to either files running locally on the device, or it can allow users to connect to files that are hosted by FileMaker Server.

Next in the platform is FileMaker WebDirect. This was introduced in FileMaker Server 14. It's a breakthrough web technology that runs custom business apps directly in a web browser, on either a desktop, a laptop, a tablet or even mobile phone browsers. This allows users to use those browsers to connect to databases that are hosted on FileMaker Server. It's not actually a separate product, but rather a technology for sharing your FileMaker custom apps. With FileMaker WebDirect, you don't need to use coding tools such as PHP, HTML, CSS or JavaScript in order to create robust solutions for the web.

Instead, you'll use your existing FileMaker skills and you can go from creating a custom app to making it accessible in a web browser with just a few clicks, and since FileMaker WebDirect looks and acts just like a desktop application it gives familiar functionality such as desktop style interaction live updates and even automated processes. Another thing to be aware of is if you plan to host a database on FileMaker Server, and want to connect to that database via FileMaker Go or FileMaker WebDirect, these are what are referred to as connections in FileMaker 15.

Now, the key with connections is that they're concurrent, so for example, a team with several members connects to FileMaker Server using an iPad, iPhone or web browsers throughout the course of the day. Now at various times there are different numbers of users connected. Here in this example you can see that each row represents one of 11 different users that could be connecting to our apps at any given time. Now, in order to determine how many connections we would need, you have to look at the concurrency. So if we see in this diagram here that around the middle of the day at the height of all its usage, we've got no more than eight users that are connected to the hosted databases at one time, that means that we only need a server license that would accommodate eight concurrent connections.

You can always buy more connections, in case you want to increase the amount of users. So you can see here that we've got a product for the FileMaker end user, FileMaker developer, and even different options for deploying your application, whether it's on your network or deploying it out to the web, or you can even be the host of an ODBC or JDBC connection, but the product that we're going to be using moving forward in this course is FileMaker Pro for 15. So all you'll need is a copy of FileMaker Pro for 15 to follow along with all the exercise files in this course. If you don't have a copy of FileMaker Pro, You can always go to filemaker.com and download a free 30-day trial, that will allow you to get a fully featured version of FileMaker, that will allow you to do all the different exercises in this course and even the files that you're working on will still be available to you after the 30-day trial if you're interested in upgrading to a full user license.