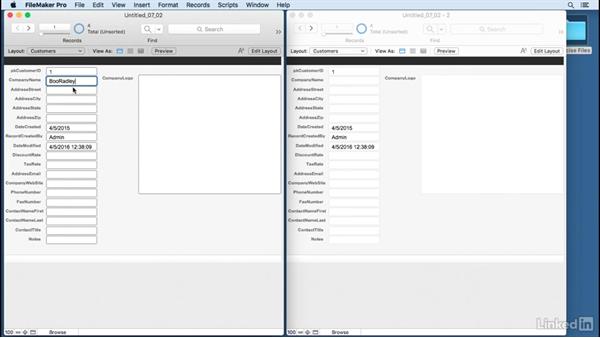 - [Voiceover] Once you have records in your database, you can edit them. Of course, there are some ways that you can control who can edit fields, and whether or not any fields can be edited at all. A lot of those are in the File, Manage Security option, where you can setup different privilege sets, and groups of users, and assign accounts to them. There's a lot of very sophisticated options there, and if you're interested in information on how to set those up, you can look at the FileMaker help system for detailed information on setting up accounts and privilege sets. You can also control whether or not users can actually even click into a field, applying field attributes, when in Layout Mode, and we'll talk about that when we get into dealing with Layout Mode in later chapters.

But, given that a user can click into a field, and that the account that they're logged in on allows them to edit, they can go into any field, and start typing, so you can see that they're controlling the record right now because all the field labels are activated, but they don't necessarily own the record, so to speak, unless they start typing and making an edit. Now, that's actually kind of a significant thing, because there's this feature in FileMaker, which controls who is owning or locking the record. So, let me show you an example of this. So, I'm gonna commit this record, I'm gonna open up a new window, and this may be the first time that you know that FileMaker can create new windows, and the way that we do that is we go under Window, New Window, and you'll see that a new window, in the same session that I'm in, has been created, it adopts the layout that I'm on, the record that I'm on, and even the sort order and other properties about this found set.

You could navigate away, and go to different layouts if you want to, but for the sake of this demonstration, we're gonna pretend that this isn't a new window in my session, but let's say I'm another user, on another computer, logged into the same file, so this thing is let's say, being hosted on FileMaker server, for example, and now, User number one over here, goes into the first record, and they start typing in here, and while they're typing, you notice I have not committed the record yet, and the other user logs into the system, and starts typing on their own.

You'll notice that a message pops up, that in this case says, that this record cannot be modified, in this window, because it's already being modified in another window. Now, this is because I'm locking the record in the other window. Now, if I were actually two different users, I'd see a similar type of message, but it would actually give me more information about who the user is, who's locking it out, so it might say, Chris is logged in, and he's editing this record, so it would tell me I'd have to wait until after Chris is done editing, and what done editing means is, I'm done editing the field, and I commit that record.

So now, you'll see that this other user can go in, and they can make all the changes that they want. Now, the other thing that's interesting though, is I can click into a field, and notice what happens when the other user wants to click in and do something, just simply clicking into a field, or clicking into a record and making it active, doesn't mean that you're locking it. What locking actually means is that someone's actively editing a record. Now, record locking is not an error, this is not a bug, this is not a thing that FileMaker does poorly, this is a great feature, and the main reason that this is such a great feature is because FileMaker doesn't want two people to be thinking that they're editing the same record at the same time.

It's kind of unusual that this happens, in 20 plus years of working with clients, we've run into really just a small handful of users that even ever see this message, to be quite honest, because really it doesn't make sense that two people are doing the same work, and therefore, working with the same data or even the same records in a business setting, but when it does happen, you want to alert users, and have them say, hey you know what, I'm editing something right now, when I'm done you can go edit it when you're done, and this is called record locking, and record locking is something that you'll need to be taking into consideration as you train your users on updating records in your FileMaker custom app when it's hosted and deployed.

So now, you can add records to FileMaker custom app, but also allows you easy ways to make edits, it's just important to understand how FileMaker prevents multiple users from editing the same record at once, and understand that that's a positive thing, not a negative attribute.