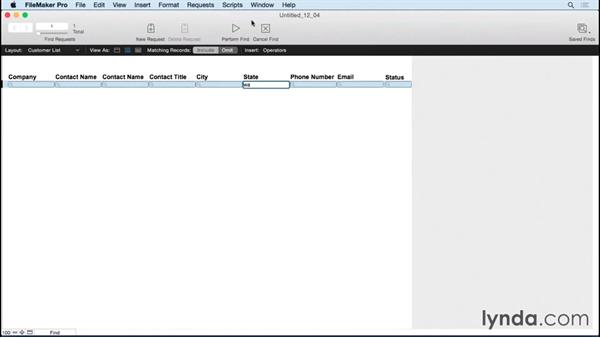 - I'd like to introduce you to a couple of different ways that you can do searches where you can actually modify a found set that you already have. These are really useful techniques when you're trying to drill down or up into data, like you can create a found set of a certain amount of data and then remove some elements of it and keep going up and down into the found set sizes that way. And in these cases, you're gonna use functions that are called "constraining or extending found sets." So let me show you an example here. So we'll entire find mode, and I'm gonna search for all the states that equal California.

I get 23 records. So now, let's say at this point, I want to find only the ones that are inactive. I can go into find mode, and I'm gonna enter "inactive" at this point, but instead of hitting "perform find", what I'm gonna do is go under "requests", and choose "constrain found set." So what I'm telling it to do is say, "Within that found set I just created of the 23 records "from California, I wanna just see the ones "that have inactive." Now it constrained it, or made it smaller, to just the number 4.

I could go the other direction as well. So now, I could enter find mode, now that I've got these four records, and I can say, "Washington", instead of hitting "perform find", I'll go under the requests and say, "Extend found set." So this includes the four original records I had including any records that match Washington. And now within these, if I want, I can say, "Find, find inactive" and constrain again.

And now I'm down to seven. So the idea here between extending and constraining is it's an option available to you, aside from performing find, instead of hitting your "enter" key on your keyboard, or hitting the button for "perform find", you can instead go under the records menu and choose either "extend" or "constrain found set." And I think this is really helpful when you're working with huge data sets of records and you want to keep asking questions of it, or you're doing some research or troubleshooting or something like that, and you keep finding, extending, finding, extending, constraining, until finally, you get a custom found set that would have taken you a ton of different custom new find requests to be able to create, but more importantly, you might not even know that you want to constrain or extend it until you see the original found set anyway.

So these might not even be searches that you know of when you're originally in find mode. So based on what you're seeing, you can then clear stuff out or add stuff to it. So keep this in your back pocket, a nice little tool for when you're searching and it's, again, it's found under the "requests" menu in find mode only, and it's called "constrain "or extend found set."

5/12/2015
Learn how to design and build smart, secure databases with FileMaker Pro 14—the database solution used everywhere from home offices to Fortune 500 companies all around the world. Cris Ippolite, drawing on years of experience with clients at his own development firm, iSolutions, walks through the essential FileMaker Pro skills, from creating tables and fields to designing layouts that display your data in a smart way. He'll also show you how to find and sort data, create reports, import and export data, write scripts, diagram relationships, and more. Watch now to start learning how to build your first database from scratch.
Topics include: