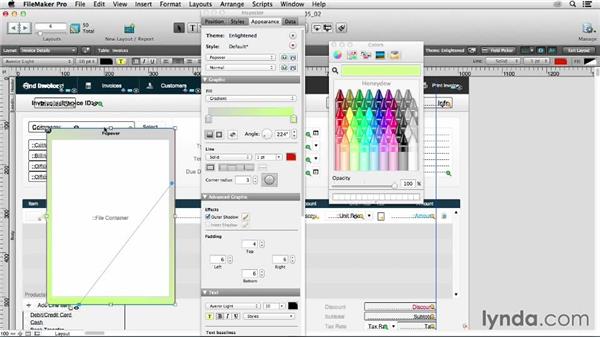 …After you've added popovers to your layout you can move or resize, reshape, copy,…delete, and arrange the objects in the popover in any way that you'd like.…You just have to do it in layout mode.…So for example, if you go into layout mode you can always tell…an object that has a popover assigned because you'll see this little badge here.…This indicates that there's a popover assigned to this button.…You'll also see a popover here on this Add…Line Item button and the Payment Info button as well.…If you don't see a badge, you can go under View> Show,…and check the Popover Buttons option in the badges that appear.…

2/5/2014
Cris Ippolite is your guide in this tour of the new and enhanced features in the entire FileMaker 13 platform. Learn how to work with styles and object visibility; add objects like popovers and slide controls to your layouts in FileMaker Pro; share your database with FileMaker Server 13; and publish it to a web browser with WebDirect. Cris also reviews the scripting and calculation enhancements and improvements in the FileMaker Go app for iOS.
Topics include: