Migration considerations from Exchange 2010 or 2013 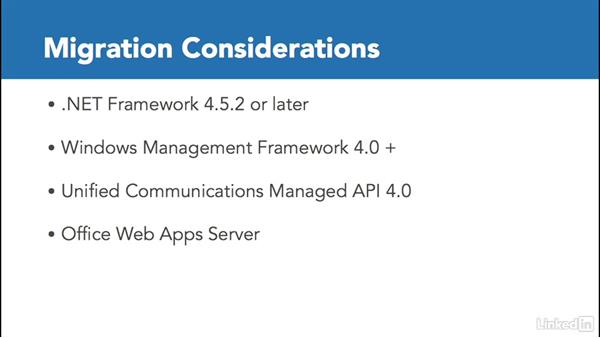 - [Voiceover] Welcome to Deploying Exchange Server 2016. There are many different ways you can and cannot migrate to Exchange 2016, and we're gonna cover those in this video. There is minimum software and active directory requirements and they're all covered in this video for your consideration. Let's first talk about Coexistence. Coexistence between Exchange 2016 and older versions of Exchange. You can have Exchange 2010 SP3 and Exchange 2013 to coexist with 2016 as you do your migration.

You may want to do this, so that way you don't have any down time while you are moving from an older version of Exchange to a newer version. So this way you can have your Exchange 2016 installed and running, and you can start migrating your users as it is convenient. Now let's discuss domain requirements. The active directory domain is what we're referring to here, and it must be at least 2008 R2 or newer. This is not the same as the server where Exchange is installed, this is active directory.

If the user already has the application installed, such as Microsoft Word, and it's a Word attachment, then they won't need to use the Web Apps Server. So this is an option for an administrator if they want to have attachments to be able to be opened by the users without having to have the applications installed on the local PC. This is what you would need to do, and this Office Web Apps Server needs to be installed on a separate server than your Exchange server 2016 implementation.

Now we can talk about clients. Clients are applications such as Outlook where you can attach the Exchange server to your Outlook client simply by opening the client, putting in your credentials, and then you can see your email, your calendar, your contacts, all the things that Exchange offers. So you want to have a client that is at least Outlook 2010 service pack two or newer. You can also go 2013 with service pack one, so if you do do 2013, you have to have at least service pack one.

And of course, 2016 doesn't require any particular service pack. If you're using a Macintosh then you want to have 2011 or newer, and that is the version of Office or Outlook. Sometimes you can just purchase Outlook by itself, other times you can purchase a version of Office that includes Outlook in the package. Another consideration is that once you install Exchange 2016 it makes certain changes to Active Directory and the organization at large, so you can no longer add an older version of Exchange.

So what that basically means is, if you already have Exchange 2010, Exchange 2013, and then you install Exchange 2016 and you have them in coexistence mode, you cannot add another 2010 or 2013 Exchange server. Just something to keep in mind. There's also a couple of different types of migrations, and this is more of a mindset than actual modes themselves. You have cutover or you have coexistence, or mixed mode.

So cutover basically means I'm only going to be using this older version of Exchange while I cut over to the newer version of Exchange, whereas mixed or coexistence basically means you're going to keep those older versions around for an extended period of time, and then you're going to eventually go to cutover mode and retire those older servers. By keeping all of these different migration considerations in mind, you will have a much smoother transition to Exchange server 2016. 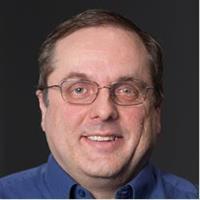 7/28/2016
This step-by-step course covers how to install, set up, and deploy Exchange Server 2016. Whether you are upgrading from a former version of Microsoft Exchange, migrating from another system, or starting afresh, this course includes instructions for you. The course starts with planning considerations including how to prepare Active Directory and relevant domains. Then, learn how to create mailboxes, address lists, and mail flows. See how to set up access from Outlook, or the web, and how to create clustering and replication to achieve high availability. Additionally, you'll learn about transport rules, loss prevention, mobile solutions, and more.

Join Robert McMillen as he takes you through the process, from preparation, and configuration, to deployment. Along the way, he informs you of new features, so you'll know how the 2016 version compares to 2013 or 2010. This course is designed to provide new or experienced networking professionals the essential steps needed for a successful implementation of Microsoft Exchange Server 2016.
Topics include:

Video: Migration considerations from Exchange 2010 or 2013