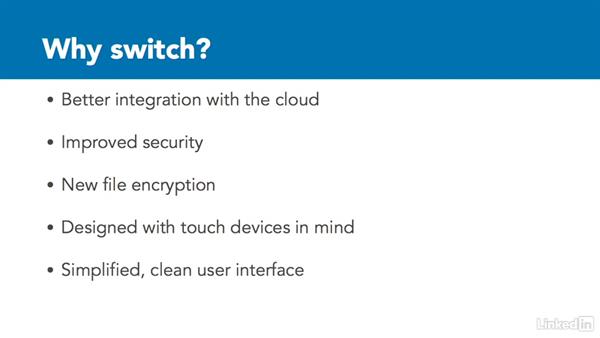 - [Voiceover] Well the truth is,…if you're using Office 2013 and you like it,…and it's doing everything you need it to do,…you don't have to upgrade to Office 2016,…no one's going to force you.…Switching to Office 2016 is by no means mandatory but,…it is a solid upgrade.…To help you decide whether to make the switch or not,…here are some things you should know about Office 2016,…versus Office 2013.…First of all, Office 2016 has been redesigned…to integrate better with The Cloud.…With one drive previously known as Sky Drive,…you can Save and Share Your Files in The Cloud,…with greater ease, so you can access them,…from any device anywhere, where you have…a connection to the Internet.…

Notice I said integrate better with The Cloud.…If you're using Office 2013,…you can download one drive to your PC,…which will give you access to The Cloud,…when you use Save As, it just won't be…the default location,…unless you make it the default,…from within your applications.…Security has been improved as well.…Preview mode for example, has been improved…

8/3/2016
Learn how to upgrade to Office 2016 while migrating all your important files, preferences, and settings from Office 2013 intact. Author David Rivers reviews the new features and improvements to Office 2016, including the new interface, Touch mode, and cloud storage features. The course then steps through the crucial new features in each of the major applications—Word, Excel, PowerPoint, and Outlook—and shows you how to import and use content created in Office 2013 in the new version of the software.
Topics include: