What you'll need for this course 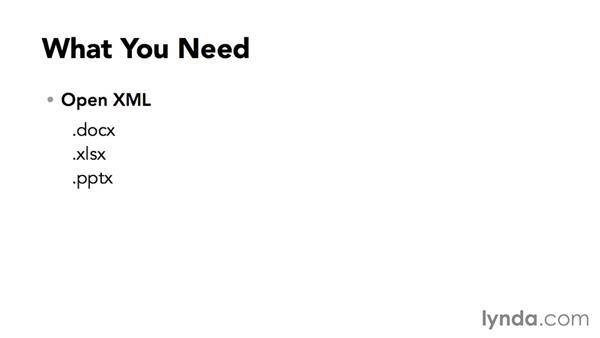 - I hope you'll be working along with me with some of the activities that we're going to do in this course, and if that's the case, let me tell you what you're going to need. First, some version of Office, that is relatively new, I use that in the broadest sense of the word. Office 365 is one of the tools that I'll be using, I'm also going to be using Office 2013, and if you're using even a newer version of Office, you're fine. Office 2010 will also work. Office 2007 is also a possible branding platform. Office 2007 can also support some of the branding activities that I'll show you.

However, I will not be demonstrating anything in the Office 2007 environment. All these versions of Office have in common, a set of file formats that are based on XML, extensible mark up language. These open XML file formats allow us to do more branding, to have those brands cross applications, and also allow us to compact files so that we get very beautiful documents and beautiful presentations, but with a smaller file size than we had previously. You'll know you're saving documents in Open XML, because of the X at the end of the file extension.

So the first thing you need is some version of Office that's relatively new. I would encourage you to get to 2013 or newer, if you can. And you need to have some skills in those applications, because this is not a beginning course in any of the Microsoft Office applications. I'm assuming that if you want to create branded documents in Word, that you know your way around Microsoft Word at at least a beginning or intermediate level. The same thing is true for Excel. You need to be able to enter information in Excel, you need to know how to format cells, you need to know things like how to create charts, and if you want to brand Outlook, I'm hoping that you're an Outlook user who is very comfortable adding signatures to documents for example.

But if you're brand new to Microsoft PowerPoint, I would encourage you to take a look at the Microsoft PowerPoint essential training course for the version of Office that you're using. Go through the first few chapters so you're comfortable working with PowerPoint, and then come on back here, for the remainder of this course.

Video: What you'll need for this course