What is a theme? 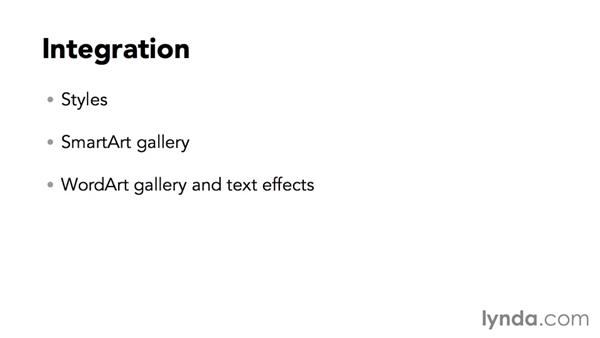 - In the newer versions of Office, Office 2013, but also Office 2010, every document you create has a theme. Whether you're aware of it, whether you do anything with it, the theme is there nonetheless. Themes are actually an extension of what you and I might think of as design templates in Microsoft Powerpoint, that's where they started out, and we'll return to Powerpoint to build themes. But themes in Microsoft Word and Microsoft Excel consist of the settings for colors, and it's the same. You don't get a different set for Word than for Excel.

A set of fonts, two, that is. And graphic effects, and graphic effects are things like the amount of translucency, whether or not there's a glow, the finish, is it satin ofrmatte or glossy? And so, typically we think of graphic effects as being directed toward objects, whether that's a chart or smart art or a background, for example. In Powerpoint, we get the color set, the font set and the graphics effects just as we do in Word and in Excel, but there's even more in Powerpoint because in Powerpoint, our slide masters are tied to our themes.

Whenever you open the SmartArt gallery, the actual objects, the smart art itself, is not part of a theme, but the colors that are available and the finish and the text that's used in the smart art, those are based on your theme. So the gallery options, including colors, are theme-based, as are the gallery for WordArt, which in Word is our text effects gallery, all of those, are based on the choices that we make in our theme. So themes are central to the work that we're going to do together. One of the great things about themes is they cross the core applications in Microsoft Office.

If a few years ago you were creating a presentation, for example in Powerpoint, and you had a table that you were pulling out of Excel, or a chart, and you wanted those two things to go together, you wanted the chart to look like it went with the background in Microsoft Powerpoint, you would have to make choices individually. I remember opening a chart in Microsoft Excel to change the color so it would look better on my Powerpoint slide. Now if you just jumped into Microsoft Office integration when you started with Office 2010 or Office 2013, you're lucky because as you know, the theme of a document is dominant, and when I take a chart out of Excel and paste it into Powerpoint, automatically, by default, says, hmmm, let me color that so you'll look like you fit on this slide.

But even if you were a rookie Powerpoint user, and a Excel and Word power user, I wanna encourage you towards Powerpoint to create themes, because themes that are created only in Word and Excel are missing these other elements that are necessary for a complete theme in an application like Powerpoint. So we will begin by creating our first theme in Microsoft Powerpoint.

Video: What is a theme?