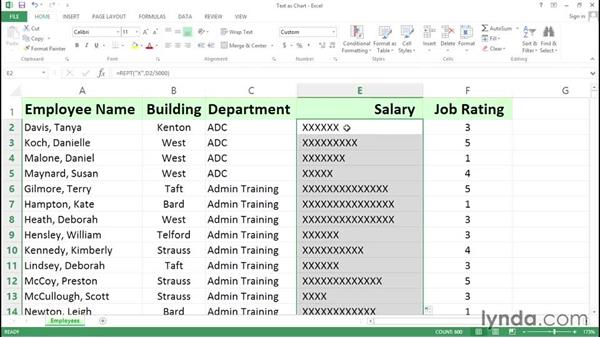 Join Dennis Taylor for an in-depth discussion in this video Using the REPT function to represent data visually, part of Excel Tips Weekly.

- You can represent numerical information visually, by way of a chart, or perhaps by way of sparklines. You can also do this by way of a text entry, using a function called R-E-P-T. Think of the word "repeat." Let's say that to accompany the data in column D, we might want a visual to the right that gives us the relative size of these salaries. Equal R-E-P-T, repeat, we begin with the symbol or symbols we want to repeat. Within double quotes, I'm gonna use capital X.

I wanna have this repeated. Now, I don't wanna have it repeated 30,000 times, but I might wanna take the entry in column D and divide it by 10,000, so I refer to column D, cell D2 here, divided by 10,000. So, we're about to see three Xs here as I double-click to copy this down the column, four Xs there, three, two, and of course this corresponds with the salary. Notice how it simply drops; we're not doing any kind of rounding or anything like that. So, this gives us a relative visual here. In some cases, you might want to hide column D.

Maybe copy the word "salary" over here, hide column D, and in this case, we're simply seeing the relative amount, and that could be fine for certain kinds of situations. If somehow or other, we wanted to show more Xs, maybe we divide this by 5,000. Now, we're gonna get six, now the visual is not as good in terms of the actual numeric content, but maybe it accentuates the differences between the salaries if we do that. We also have the option here of referring to an external cell, so this isn't necessarily an explicit character, could be an external cell.

For the moment, maybe I'll make it refer to cell G1. Now G1 right now is empty, so when I press enter here, we get nothing, but suppose in G1 here, off to the right, I'll simply put a symbol in, and maybe we'll try a different symbol, and, it could be a combination of symbols, too. Maybe I'll simply put in a plus. So, now we see pluses here, and we need to make that an absolute reference highlighting G1, press F4, and then copy. So, we can put different symbols in there, and even combinations, if you put in here, for example, the two different slash symbols going opposite directions.

I don't think that would be a good choice here, but you see what's happening, we'd have to make column E wider, and many times you would if you're using two symbols, but again, that's your call how you want it to be. I'll put in left bracket and right bracket. That's another kind of display that we see over here. I think the X is probably as good as any of these, but you might want to experiment with this. It's maybe a little bit fun and games, maybe a chart would be better, maybe sparklines are better, but on the other hand, this technique, occasionally useful for displaying information in a visual way that gives us a different sense of the numbers.

And, it's up to you to decide whether you want to accompany this on a screen with the actual salaries being shown, or simply this technique we're seeing right here. Again, the function's R-E-P-T. We've got a symbol or symbols in a certain location, and we've got either an explicit number or a formula to indicate how often or how many times that symbol is going to be displayed in the cell.