Using a pick list, VLOOKUP, table, and chart together 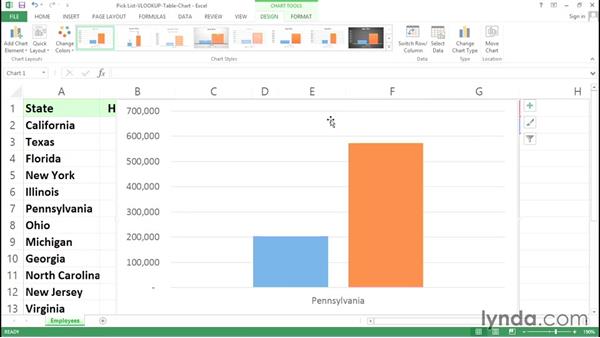 Join Dennis Taylor for an in-depth discussion in this video Using a pick list, VLOOKUP, table, and chart together, part of Excel Tips Weekly.

- By combining different Excel features, you can come up with a presentation model like the one we're about to see. We're gonna be using a Pick list, the VLOOKUP function, the table capability and charting. In the list of data that we see off to the left, we've got some of the major States listed, Houses Sold, Cars Sold for a given year. We'd like to display this as a chart. And we want to make it dynamic. Let's start with the idea that the State entry in cell E2, that we're gonna put in initially, should come from a Pick List.

Now Pick Lists are part of what we call data validation. Let's image, for the moment, what we're about to see is a Pick List here that will let us select a state, then we'll use a VLOOKUP function to show the houses sold and the cars sold. We'll have this converted into a table and then base a chart on that information. And one of the advantages to using a table for a chart is that if we happen to add data, and we might want to do that, the chart will grow automatically. So let's start with a Pick List idea.

In cell E2, and cell E2 only for the moment, we want to set up a Pick List. In the ribbon Menu system, go to DATA, and then Data Validation. On the Settings tab, allow, not just Any value, but List. Source list, click in this panel, and go highlight the States, A2 to A15. Click OK. Now when we click the drop arrow, we pick any of the states. The order of the states here is the same as it is in the list over in Column A. If you find that awkward to locate a state, you might want to consider alphabetizing the states.

Of course the numerical entry more or less coincides with the state population entry. That's how this list was originally set up. So, think that one out a little bit. For the moment, the order's the same as we see it over here. So let's image, we'll just pick a state, for example, Pennsylvania. Houses Sold. Pennsylvania that's going to be 203,000. We'll do this by way of a VLOOKUP function, and let me zoom in on this too so we can see it a bit larger, Equals vlookup, we're looking at the data from cell E2, comma, in the list.

And for the moment we only care about columns A and B. VLOOKUP is based on the data in Column A. We're trying to get the Houses Sold number out of Column B. And we can use the entire column references in these examples because there's no other data in Columns A and B. Comma, the Column number that we need is the second column reading from left to right, that's why we put in the number two, right here, after the column reference. Two, the column number. Comma, we need an Exact match.

We must match up Pennsylvania exactly. We can either type in FALSE or zero. I'll use zero, it's a bit shorter. And we've got the right number, 203,000. Let me make Column D a little bit wider. Instead of re-writing the formula completely, I'll simply drag this to the right and then make some adjustments. The VLOOKUP we want to be using in Column G is gonna based, again, on the data in E2, so we'll make sure that's E2 right there. And now we're looking at Columns A, B, and C. So make sure it's A:C. And we're trying to get data out of the third column reading from left to right.

That's Column C. Must be an Exact match, zero. So if this is going to work properly, we're expecting to see 573,000. And there it is. So we've got this set up. Now, if we base a chart on just this data here, we will have a chart. But, if we decide later to add data here, we'll have to redesign or make changes to the chart to make sure it picks up the additional data. Instead of doing that, we'll simply convert the data to a table, and that means that if we add new information below the table, for example here, it will become part of the chart automatically.

Click within this data, INSERT, Table. OK, there it is. Let's base the chart on this. We need only click on one of the cells here. Press Alt F1, there's the chart. I'm gonna simplify this a little bit and move it around so we can see everything. I'll get rid of the title here. And shrink the chart from its upper left corner. Move it around a little bit this way. There we are. And you see the display. We're showing Pennsylvania with the appropriate labeling there. And let's just try a few other options here too.

We'll click the drop arrow here. Choose Ohio. Got our data there. California. Now you might be recognizing a change as we go through these. The scaling on the chart changes. And, on the one hand, that's okay because it does reflect the fact that when the numbers are lower, we want these boxes maybe to be bigger. But if I'm looking at Florida and I see I've got this image in my mind and now I switch to a state with a smaller population like Georgia, we've got different scaling going on here and I'm remembering the size of the box and somewhat like Florida but I forget now.

So with the idea is we could standardize this by simply right-clicking this vertical axis here, choosing Format Axis. And then off to the right, we're gonna set up an automatic reference here. Now, before doing this, we want to make sure what the highest state entry is. And for Houses Sold, we can see that that's California. So let's just make it, for example, two million. and Enter. Now, we're gonna have this for all the states. Let me zoom back a little bit too, and perhaps make the chart a little bit larger so we can see all this at once.

We see our data this way. So, we're seeing Houses Sold, Cars Sold here. And, choose a different state. This time California. We're still seeing the two million figure. And now as we see these different columns pop up, we're getting a relative depiction of how many cars and houses were sold in each case. Now, what if we take the idea that might be more interesting here, more valuable, if we could show or contrast two states together. So, I'll simply will click cells E2, currently containing Pennsylvania, drag the lower right-hand corner downward, for the moment we've got two Pennsylvanias.

But when we drag the cell down we also get, in this cell, the Pick List with it, that feature copies also. We'll choose Michigan here. And now we're seeing Michigan and Pennsylvania data together. Or maybe we want to contrast California and Texas. And, again, you'll decide how best to work with this. In other words, is it better to display two sets of states, or maybe three? We could drag this again and do a third one down here. Maybe we'll do Florida in this one.

And so on. If we change our minds a bit later and only want to do two states at a time, we can just take out ... First of all, if we take out the data, what happens here? In a certain sense that's viable. We do have what looks like it might be a gap in the chart. But you could live with that possibly. If we no longer want this here, another approach is to simply to drag across this, right-click, and actually Delete, in this case, the Table Rows. And now the chart re-adjusts. If we only wanted to see Houses Sold or Cars Sold, we could simply hide the column.

So let's say we're focusing on cars only. I'm going to right-click Column F and Hide. Now we can see what's going on there. Now the chart changes its shape too. But, nevertheless, we're seeing just the data we want to see. At a later time we might bring that back. Drag across these columns, right-click and Unhide. So we're seeing a different way of presenting information. We've got the dynamism of table available here. We've got a chart that reacts to the changing size of the table. We've got a Pick List that allows us to choose different states.

If it bothers you that this is not in the order that you want, I'll make a change here. I'll click over in Column A here and simply do an AZ sort off the DATA tab. Choose AZ. Now the list is alphabetical. And now in our Pick List here, if we're trying to change this to a different state, let's say. And now from the Pick List we can find our states alphabetically. It's just a question of what's more comfortable to you. The downside now could be, as you look at this, it's not in descending order as it was initially by Houses Sold or Cars Sold. So, different approaches here to using different features in Excel.

We saw a Pick List, a VLOOKUP, table, and chart all together.

Video: Using a pick list, VLOOKUP, table, and chart together