Use the notes function 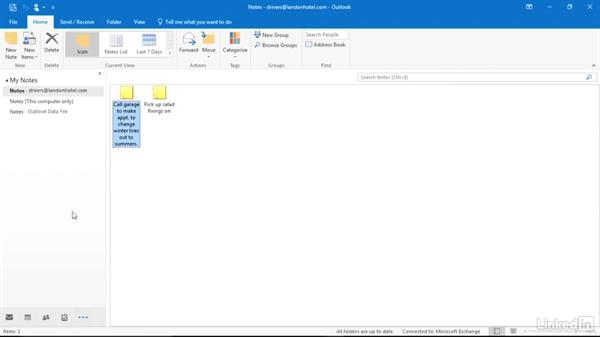 In Outlook 2010, many users like to use the Notes feature to write the electronic version of sticky notes. In Outlook 2016, it could appear as though the Notes app has gone missing, but it has not. In this movie, you will know how to find the Notes function, and customize the navigation options to make them easier to access from the navigation pane.

- [Voiceover] One question I often get…from people who have switched from Outlook 2010…right over to Outlook 2016 is where did my notes go?…If you're accustomed to writing your own little sticky notes…here in Outlook, well, they're still here.…They're just hidden by default.…We talked earlier about the sneak peeks down below,…how we could sneak peeks of our calendar, contacts,…our tasks, and if we wanted to change the icons…that appeared down below, we can click the ellipses.…Give it a click.…You'll also notice Notes, Folders and Shortcuts.…

There's your notes.…All you have to do to access them is give them a click…right from there and you've switched over to your notes.…Now, if you like to see Notes down below,…we already talked about how you can customize…what you see at the bottom.…Click the ellipses.…Go to Navigation Options.…Let's bump this up to five because as we look at the list,…Notes is number five on the list.…So if I bump this up to five and click OK,…well, there's not enough room for me to see five,…

Video: Use the notes function