Understanding the hierarchy of operations in Excel formulas 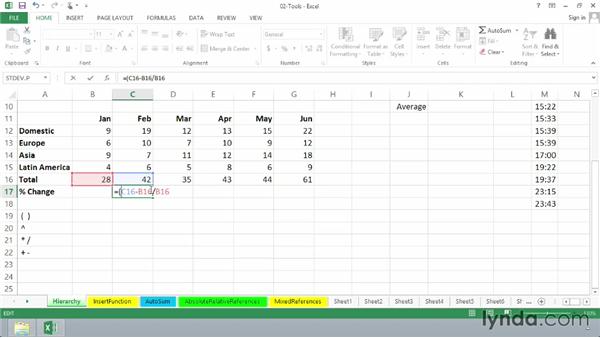 Join Dennis Taylor for an in-depth discussion in this video Understanding the hierarchy of operations in Excel formulas, part of Excel 2013: Advanced Formulas and Functions.

Probably the most common reason for a formula not giving you a correct answer, is either the misuse or the non-use of parentheses. It does emphasize a concept too, in Excel, it's called the hierarchy of operations. In this worksheet called Hierarchy, we're about to write a formula in cell C17 that's going to calculate the percent of change, if our total grows from 28 to 42. We've actually grown by 14, which is half of what we started with, so this would represent 50% growth. And in standard calculator's if we were working with a manual calculator, we would preform the subtractioin first, something like this. And then we would divide our answer by the what, the number we began with. And pressing Enter here gives us an answer but not really the answer that's correct, it's 50% growth.

And what really has happened here, in this particular formula. Excel, unlike standard calculators, performs the division first. Now the symbols you see in column A starting in row 19 represent what's called the hierarchy of operations. And when Excel sees a formula you could say it refers to that list and says, in effect, what's the first symbol in the formula that I see here? Looking down from the top. Well it's the division symbol. And so Excel will actually divide these and of course that's the value one. And then we're simply saying, what 42 minus 1. That's how I get the 41.

That's not the correct answer. And so what we really need to do is to change this so the subtraction takes place first. And we do that by putting in parenthesis. And of course, in the hierarchy of operations, parentheses are considered before division. Everything with in the parentheses is done left to right. So now, the calculation will be such that, we will subtract the two, then take that result and divide by our starting value. And the answer 0.5 is correct. Most of us would then click the Percent button on the Home tab to display it as 50%.

And any time you've got a formula that's giving you an obviously incorrect answer. Certainly one of the first things to look for is either missing parentheses or possibly misplaced parentheses. Some people overcompensate by putting in additional parentheses, for example here. That doesn't really hurt. That does maybe make the formula a little bit more complex looking but that's not a problem. Anytime you've got a format with an incorrect answer that's likely the first thing to be checking for. The caret symbol that's depicted right here is not used by too many people but if you have mathematical applications.

It would be appropriate to use that symbol to raise a number to a power. So in an isolated case, here's a value. If you wanted that value squared, equal this cell caret 2. And perhaps, in a different situation, if you wanted the cube root, fourth root of a value. Equal this particular value. And we raise this to the 1 3rd power if we wanted to do a cube root. Not too many of you will need that, but that's how that's done, too. And the parentheses are absolutely critical in this example. So the cube root of 56, on our example here, is 3.82. So it's important to recognize how Excel performs calculations and formulas. And most of the time, it's simply a question of putting in parentheses in the appropriate locations.

Video: Understanding the hierarchy of operations in Excel formulas