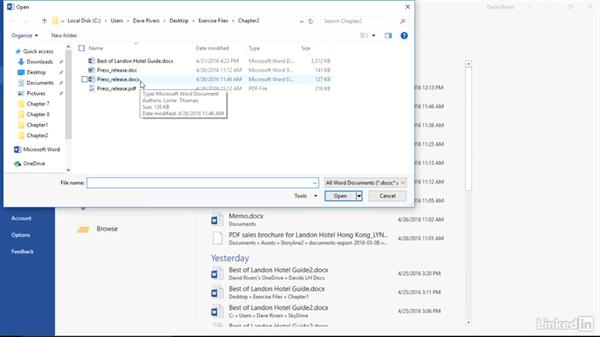 For those migrating from Word 2010 to Word 2016, there is good news regarding file formats. The same xml based .docx file format used in Word 2010 is used in 2016. In this movie, you will know the differences between .doc, .pdf, and various .docx formats when opening files in Word 2016, and how to recognize .docx files create in older versions of Word.

- [Voiceover] In this chapter,…we're going to shift our focus to Microsoft Word,…migrating from Word 2010 to 2016,…and we're gonna start with some good news…regarding file formats.…Here in Word 2016,…you'll work with the exact same file format…your accustomed to working within Word 2010.…That is a Word document with the extension .docx.…So, those documents you were working with in Word 2010,…you'll simply open up here in Word 2016.…There's no conversion necessary.…That being said, there are some new features here…in Microsoft Word that did not exist in Word 2010,…so you might see some funny things happen on your screen…when working with those older documents.…

That's what we're going to talk about right now.…Notice I've closed up everything here on Word 2016.…You can do the same if you're following along with me,…and click file, and then open.…We're going to open some files from…our chapter two folder of the exercise file.…We'll go to browse, and mine are on the desktop,…you can see chapter two already opened up here.…