Understand the changes in Office 2016 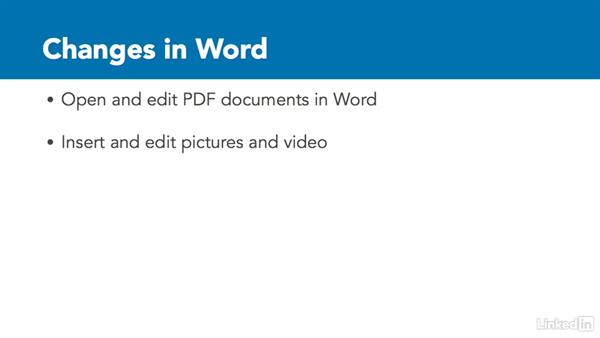 - [Voiceover] Well the truth is, if you're using Office 2010 and you like it and it's doing everything you need it to do, you don't really have to upgrade to Office 2016. No one's going to force you. Switching to Office 2016 is by no means mandatory, but Office 2016 is a solid upgrade. To help you decide whether to make the switch or not, here's some things you should know about Office 2016 versus Office 2010. First of all, Office 2016 has been redesigned to integrate better with the cloud. OneDrive, previously known as SkyDrive, you can save your files to the cloud with greater ease so you can access them from any device anywhere where you have a connection to the internet.

And notice I said integrate better with the cloud. If you're using Office 2010, you can download OneDrive to your PC, which will give you access to the cloud when you use Save As, it just won't be the default location unless you make it the default from within your applications. Security has been improved as well in Office 2016. Preview mode for example has been improved to protect better against exploits and blocking network access until the user deems a file safe. Also a new file encryption method is going to help administrators with decrypting Word, PowerPoint, and Excel files that have been password protected and the password has been lost.

If you use tablets and other touch devices, you'll find Office 2016 works extremely well in touch mode, and it can be switched back to mouse mode in a snap. The interface in all the apps has been cleaned up and simplified so you can focus on your work without being distracted by colors and animations and the user interface. At the same time, it will feel familiar and simple to use without too much of a learning curve to pick up the changes. Not a huge reason to switch though.

Now Word users will love the new ability to not only open up PDF files, but to edit them and save them as well. Now this is not possible in Office 2010, but there are programs you can download to allow for this, like Queue PDF and PDF Escape. It is easier than ever to insert pictures and videos into a Word document now with plenty of powerful editing features built right in and if you do this on a regular basis, you'll find the upgrade worth while. And Excel gets it's share of improvements too, like intelligent new features for filling data into columns, chart recommendations, and cool charting customization options, but there is one feature in Excel 2010 that has gone missing in Excel 2016, the PowerPivot add-in available in Excel 2010 is no where to be found in Excel 2016 if you have the Home and Business, Home and Student, or any Office 365 subscription, aside from Office 365 Pro and the E3 or E4 Enterprise Subscription options.

So if you love the PowerPivot feature and you can't live without it, make sure to choose the right Office 2016 or Office 365 version. Right now Outlook 2016 has it's fair share of enhancements too, like peeks, that allow you to view calendar, contacts, and tasks all from one screen without having to switch out from one to another, and I also like how I can reply to messages from the reading pane without opening the e-mail message itself and keep track of contacts with greater ease thanks to People Cards.

In PowerPoint, the presenter view has never been better with new features to enhance your experience when delivering your presentation and dazzle your audiences. Designing your presentations gets easier too with new SmartGuides and an Eyedropper tool and you can even save your presentations to .mp4 video files now. Of course, there are other apps in the suite that also get these interface improvements, visual enhancements, and plenty of new features, OneNote, Access, Publisher, Project, and Visio, have all become more powerful, yet easier to use.

So, these are the things to consider when deciding whether to upgrade from Office 2010 to 2016. If none of these new or enhanced features and functions interest you, you're probably going to be fine staying put with Office 2010, but if you feel like you've been waiting for any or all of these items listed here, you're probably ready to take the plunge, but there's not need to decide right now. You can get a free trial of Office 2016, then stay with me as we look at the changes in the upcoming movies.

You might have a better idea by the end, if you're ready to upgrade or not.

Video: Understand the changes in Office 2016