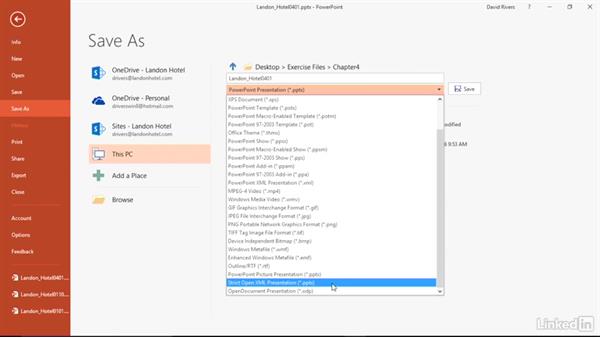 While file formats for PowerPoint presentation files have not changed from PowerPoint 2010 to 2016, there are some new formats you can save to. In this movie, you will know how to save to new formats such as mpeg 4 and strict open xml formats, and check compatibility with older versions of PowerPoint from 97 to 2003.

- [Voiceover] It's time to shift our focus now…over to PowerPoint, and the good news for anyone…migrating from PowerPoint 2010 to 2016…is the five formats have remained exactly the same.…In fact, if you were to open up a PowerPoint presentation…like this one, Landon Hotel 0401 created in PowerPoint 2010,…you won't even see compatibility mode show up at the top,…and that's because there hasn't been a big difference…in the features and functions between the versions.…There are, however, a couple of new options to save to,…and when we go up to the File tab and go down to Save As,…and you can be working with this file or any file,…we're gonna look at the Save As options for file formats.…

You can see the default is at PPTX Extension.…Click the drop down, you're gonna see some familiar ones…like macro enabled presentations.…There's the older format, 97 to 2003 that used…the PPT extension, but here's a cool one, MPEG 4 video.…You can now save to a movie file.…So if you're going to share your presentations with people…