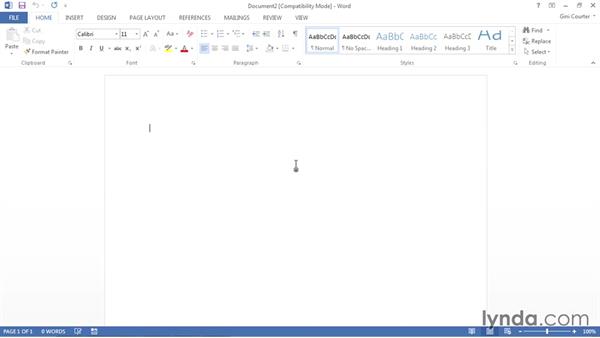 - Compatibility mode is a switch that's set on each document that indicates whether that document will be saved in open xml format or in a legacy format, whether this will be saved as a .doc or a .docx. There are two ways that you end up in compability mode in a document. One is you open a document that was created and saved in one of those earlier file formats, whether it was saved in Office 2003 or saved in Office 2010 but saved to be compatible with Office 2003 isn't really germane. You'll know you're in compatibility mode because when you look at the top of the screen, the name of the document is followed by compability mode in brackets.

We don't want to use this mode to work on our documents for branding, so the easiest thing to do if you're working with a document that was created in the legacy format is to click file to go back stage, and simply click convert to convert the document. And when you do it will be saved then, in a newer file format, it will be upgraded, and there may be some minor layout changes and it tells you about that. Normally your file size will get smaller, and your file will be more stable, less corruptible, but it will also be a file that we can do some cool branding with.

Now the other way that you might end up in compatibility mode is that your organization made a decision at some point that you had users who were still in Office 2003 that you shared documents with, and that you would therefore work in compatibility mode. So what they did was they set compatibility mode as the default for Microsoft Office, Microsoft Excel, Microsoft Word. To change that, for each application, go backstage, and then choose options. Click save, and at the top, where it says save files in this format, it should not say Word 97 to 2003, Power Point 97 to 2003, and so on.

It should say Word document, Power Point presentation, Excel spreadsheet, and show the extension that ends in an x. Now if you change out of compatibility mode, you will need to have a dialogue with users who you've traditionally sent legacy files, but let's bear in mind that the last version of Office that required compatibility mode was Office 2003, that's 11 years ago. So we have fewer and fewer users using older versions of Office, and there is a free compatibility pack that they can install and probably have installed by now to be able to open documents that you create using the open xml format of the newer versions of Office.

So if you have been working in compatibility mode, this is a good time either to change or, if you feel the need to have a conversation about who the users are that still need to recieve documents using an Office 2003 or earlier format, so that you can still support them, while you will be able to take advantage of the tools in the newer versions of Office to brand your documents.