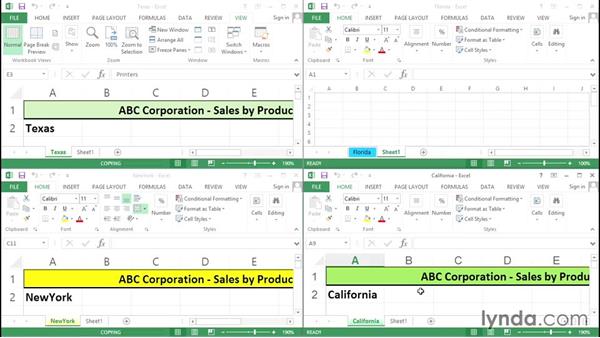 Join Dennis Taylor for an in-depth discussion in this video Splitting and consolidating workbooks, part of Excel Tips Weekly.

- At times you may want to split worksheets of a given workbook, say this one here, into different files. We might want to have a file for California, Texas, Florida, and New York. And at other times, the reverse might be true. You might have different workbooks, you might want to consolidate them into a single workbook. Let's show both approaches. First of all, if we do want to split this particular workbook into different workbooks, we could save this four times, each time under a different name. Using the command sequence: File, Save As.

So we could save this as California, save it again as Texas, and as Florida, and as New York. And then open each file and get rid of the worksheets that are not really relevant to that particular state. So that's certainly one way of splitting this into four separate files. Another way, slightly more visual, and one that we can show you a little bit better on the screen, is simply to create, three new workbooks, and then drag the relevant sheets into each workbook. So we got a workbook open already, called FourStateSales. Let's create new workbooks.

We can do that quickly with Control N; N for new. There's a Book5, Book6, Book7. If you've been working with Excel, and opening others at different times, those numbers might be, two, three, four, four, five, six, something like that. Let's display them all at once. View tab, Arrange All. Tiled will work best here, click OK. Pretty crowded screen, but nevertheless, we can see four separate workbooks, three of them have not yet been saved, or renamed yet. We've got our current workbook open, in the lower-right corner.

We'll leave California there. Here's Texas. I'm going to drag this sheet into one of the other workbooks. Say, the one on the upper-left. We've moved Texas out of there. Come back to Florida, drag this into one of the other open workbooks. And then finally, New York. We'll drag this to the left, into the other workbook. So upper-left corner, we've got a workbook, temporary name Book7. We'll just do a File, Save As, and call it Texas, perhaps put it on the Desktop, or anywhere else, or anywhere else we want, and we'll call it Texas.

And then for New York in the lower-left here: File, Save As, same idea, same location, and we'll call it, New York. And then finally for Florida here: File, Save As, and the current one we can keep the name or possibly, we'll save it as California. By the way, in doing that, we are not in any way, destroying or altering FourStatesSales. We're actually saving this under a new name. So here as we do, File, Save As, back to Desktop, and I'll call it California.

So now we've got four separate files. And that's certainly a sensible way to do that. In these different examples too, you can sometimes drag three sheets, four sheets, five sheets, at certain times too, maybe, you're a little bit nervous about destroying the original, so instead of actually dragging a sheet to move it, you can drag a sheet by copying it. Now, I really don't need the California sheet, in the Florida file, but if somehow I wanted a copy of it, I could be dragging the California sheet from here, with the Control key up here this way, and letting go of the mouse first, once it got there.

Now I really don't want to do that, so I'll simply, since I can't do the Undo feature for this example, simply right-click and delete the sheet. So we've seen a technique here, for splitting a file into multiple files. Now let's do the reverse, so I'm going to be closing all these. And the little scenario that were thinking of now, is, we'll simply close these, and imagine a situation where I've got an empty workbook, on the screen here. I've decided to close California, and now different scenario, where I've got four separate workbooks out there, I want to combine them into one.

Now I've got a blank workbook open, that's not really necessary, but I just want to have the screen displayed here, to make sure that your seeing that we are in Excel. So i'm going to do file open I'll press Control O, that's a relatively fast way, since I've save these files recently, we'll see them right here. So I'll simply click California, and then Control O, I'll click Florida, Control O, Click New York, Control O, and Texas. There we are. And let's display all four of these together. View tab, Arrange All, Tiled, Now I did have an empty workbook out there, and we could use this as a receiving area, that's the workbook off to the right, and then each of the other tabs, you don't always see the data.

So you might have to click on a tab. So in the upper-right here for example, that's the California file, there's the California sheet. Florida, there's the Florida sheet, so on. So we're seeing the different worksheets here. And now in no particular order, but you might have a particular order in mind, here's the workbook in the lower-right, has the temporary name, Book8. It's going to be the receiving area. So, I'm going to go to the California sheet first, and drag this into Book8. Now, if I don't want to really destroy or change that file, I've got two options I'd be thinking of here.

And then the New York Sheet, drag that into Book8, with the Control key. One thing to look out for is, that if you don't have another worksheet available here, for example, if I didn't have a Sheet1, next to California, and I tried moving the sheet, that would not be allowed, because and Excel would stop me, because there's no sheet left in the workbook. So you always have to have at least one sheet here, if you are moving. Now for the moment, we have not yet destroyed the other files, but we now have a file here with the temporary name Book8, that is pulled together different worksheets, from different workbooks.

And so probably what we do is just close the other files. So here's the Florida workbook right here, and I'll click the X in the upper-right hand corner, and I'll click up here, in the New York File, close it. Click in the Texas File, close it, and click in the California File, close it. Expand what we have left, and now we're on the road to saving this under a new name. So we brought together different worksheets from different workbooks to consolidate them into one new workbook. And then eventually and soon, we will get rid of the other workbooks.