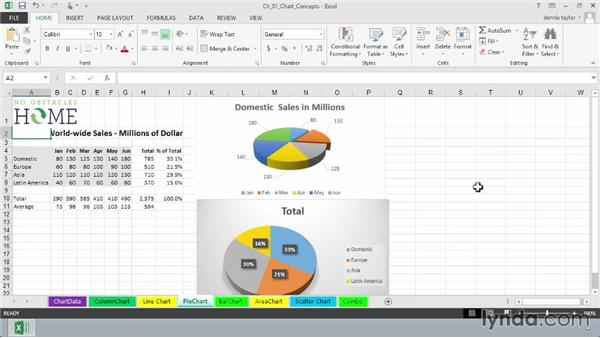 Excel has a variety of chart types, and although it's pretty clear that certain chart types might best for some kinds of data, it isn't always best for all kinds. On this worksheet called ChartData, probably the most common kind of chart you will see in Excel, is the so called Clustered Column Chart that we see below the data. Right here on the left side of the screen here. There are other kinds of Column Charts as well. The chart to the right of the data is called a Line Chart. It's generally agreed that if you're trying to show a trend or the lack of a trend, line charts are best. We tend to read that from left to right.

Pie Chart, one that's seen to the right of the Line Chart, is fairly common for showing data. When you're trying to show each piece as a component of the entire region or, perhaps, year as it is, in this case, half year. We have different reasons to use different charts and in Excel, it's easy to change these as well too. The next sheet over called Column Chart, shows us some variations on Column Charts. And sometimes it's just a question of the formatting that makes one chart a little bit better than the other.

Many people will use Column Charts to indicate volume. Perhaps it's better doing that then a Line Chart. Sometimes it's just a question of what's easiest to read. One thing for sure, you don't want to be spending a lot of time explaining how to read a chart, particularly if you're making a presentation. Or if you've sent out some printed material. The less explanation necessary, the better. Column Charts are probably the most common for most Excel users. Here are some variations on that type. The next sheet over shows a Line Chart, based on data from January 2011 to June 2013.

And again, it illustrates the almost native ability of a Line Chart to suggest a trend. And we can certainly see here that generally upward trend with a lot perhaps erratic behavior along the way. But we do get the big picture of what's going on here, and perhaps better than we would by way of a Column Chart. The next tab over, Pie Chart, shows us two different kinds of Pie Charts. The one on top there is showing the breakout based on just domestic sales. And each wedge there represents a different month, and we can see the legend below that explaining it.

And so those pieces comprise the whole. Below that, a different use of a Pie Chart, but the same general concept. Here we're looking at these total numbers over in column H. And we're seeing rather quickly that Domestic is about a third of our total sales. And that brings out the data nicely. And gives us a good visual image to accompany the data. A Bar Chart, you could see is nothing other than a column chart rotated 90 degrees. In some organizations these might be a bit more common than Column Charts, but the same general idea. If you envision perhaps a goal or the numbers moving rightward. Sometimes people use this, they think it's maybe got a little more action to it than a column chart, but perhaps those observations are subjective. But it's another variation on displaying the data. An Area Chart, again, it has its uses this perhaps suggests volume. This case volume growing over time, and we can see that. It's similar to a Line Chart, and yet it's a different feel, perhaps. There are specialized charts, we won't mention all of them. But here's a Scatter Chart, and here we're trying to show possibly the correlation between the age of runners who have finished a race, and the time. And we're showing both of those there, along with a line. These are called Scatter Charts, sometimes XY Charts. A new chart in Excel 2013 is called Combo.

Now, actually these were available in prior versions, but you had to construct them pretty much. It's now considered a separate category. And this is ideal when we're comparing different kinds of values, that otherwise wouldn't be seen very well on this same chart. This particular chart we're seeing miles driven and also miles per gallon. We read the columns off the left side and the line off the right side. And so at different times, you will see different kinds of charts types. One thing for sure, when you create a chart, if you're not sure if it's the best chart, you can easily make changes here. Excel gives us 53 basic charts, but there are hundreds of variations for each of them.