Selecting data to display on a chart 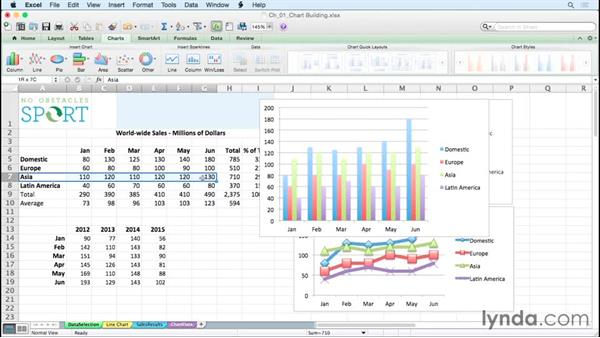 - Creating a chart in Excel is relatively simple and straightforward. If you wanna create a chart, perhaps like the ones we're seeing on this worksheet, a line chart to the right of the data, there's a column chart below it, a 3D column chart to the right of that, there's a pie chart. There are lots of different chart types in Excel. But the actual first step in creating a chart is selecting the data to go into a chart. If you know just a little bit about the chart process in Excel, you know that it's about displaying values, numbers, without numbers, you really can't create a chart.

It's just a blank chart. On a different worksheet here called Data Selection, I've got some numbers here. There are two charts there already, I might like them, but I wanna create another one. How did those get there, how do we create, what do we do first if we're looking at this data? First thought might be, if it's all about numbers, let's just highlight the numbers. But nearly always in Excel, the numbers that you're looking at are identified, usually, with a row on top and a column down the left-hand side. Showing totals and details usually together doesn't work so well.

Here's a number that's 785, here's a number that's 40. If those are depicted as columns, you can imagine the discrepancy and the size of those. As we highlight data, include the numbers along with the adjacent data that's typically there, those labels, and as a general rule, don't mix totals and detail, percentages wouldn't work so well here either, those numbers are actually below one. So let's highlight this data. We can then go to the Charts tab in the ribbon, and pick one of the choices here, I'll simply go with Column here and choose Clustered Column, probably the most common chart type in Excel.

And there's a chart right on the worksheet. Most of the time when you're selecting data for a chart, the data that you want is adjacent. It usually, as we highlight it, we see a rectangle. I might wanna do just the first quarter, for example. I could highlight this data and create a chart. But what if I only wanted to include some of the regions here? What if, for example, I want a chart with Asia and Latin America only? If I highlight this data and create a chart, I won't have any headings up top. Maybe I want to include Domestic also.

So, releasing the left mouse button now, and now holding down the Command key, I can highlight these cells here. So the Europe data will not be included in the chart. We're highlighting non-adjacent areas. And here, too, I'll go back into the ribbon menu system on the Charts tab, choose Column, Clustered Column, and now we have a chart that does not include Europe. And there could be times when you wanna create data from cells, for example, out of the total.

Suppose we wanted to show these totals, maybe in a pie chart. We need some labels there as well, and so we'll highlight the data over in column A. Once again, after selecting this data and releasing the left mouse button, we can now hold down the Command key and highlight this data. If I want a pie chart, there's Pie right there. I'll click that icon, perhaps a 3D Pie. And there we see it. So selecting data, relatively simple, straightforward. Most of the time, we're highlighting one chunk of data, one rectangle.

There is the possibility that sometimes, you wanna chart together data from different sources. It will work a little bit more smoothly if you pull that data together first, put it all in the same worksheet, put it together, but there certainly will be times where that's not necessary and maybe even inappropriate. You can create a chart from data on one worksheet, then copy data from another if you want to share that data as well. And if you have a list of data that's surrounded by empty cells like this list here and or worksheet boundaries, you don't even have to select the data.

You can simply click within it. The assumption is all this data here will be in the chart, and it will. Click anywhere inside here. Once again, I'll go to Column and simply click Column, and we create a chart that way as well. So all we need to do is highlight the data. Most of the time, it's in one single rectangular cluster. We showed how you could do this with non-adjacent areas, then we simply create the chart from those ribbon choices that we see on the Charts tab.

Video: Selecting data to display on a chart