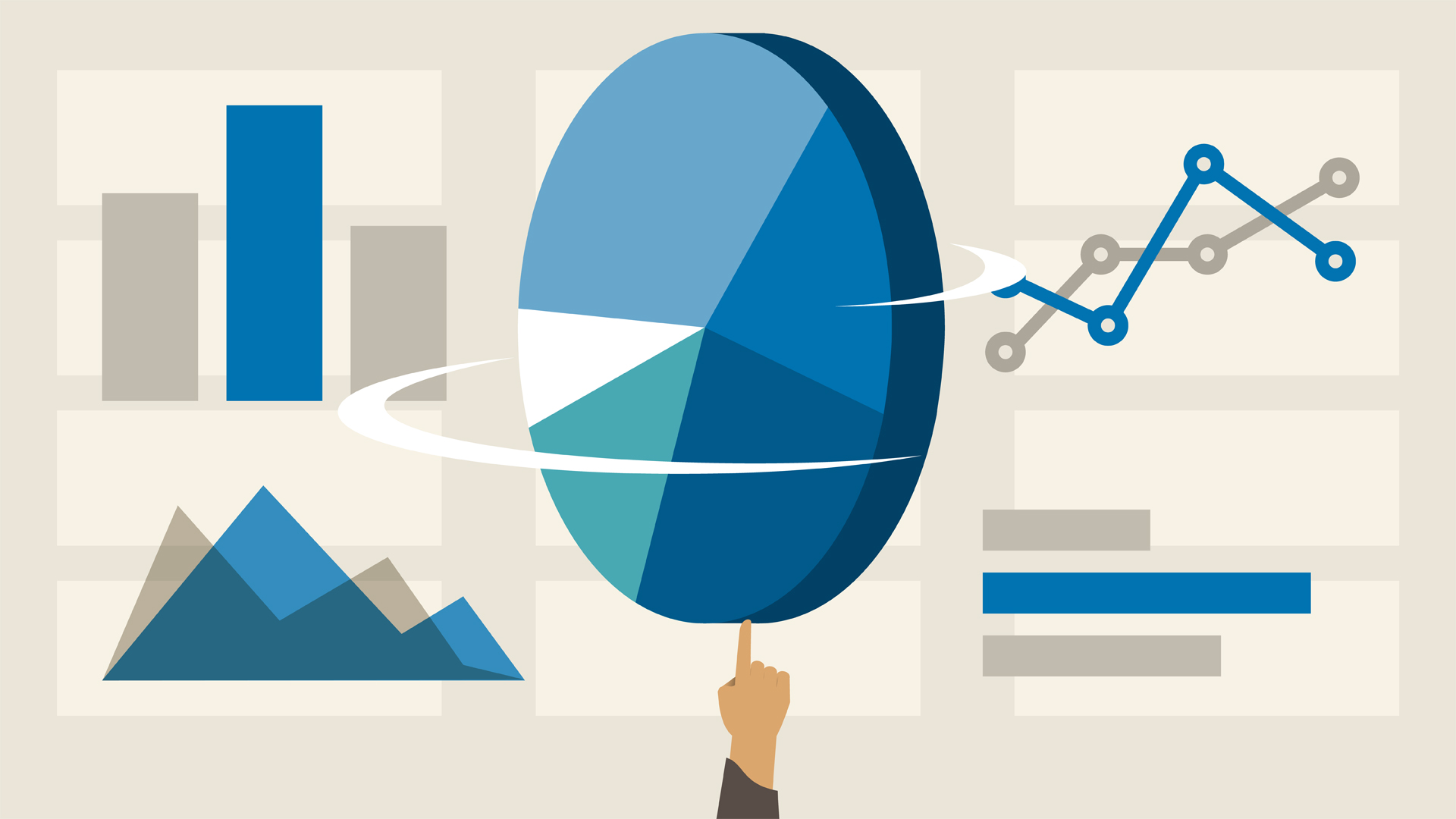 Join Dennis Taylor for an in-depth discussion in this video Select the right chart type, part of Excel: Introduction to Charts and Graphs.

- [Instructor] On this worksheet called Chart Data, we're seeing a variety of different chart types. Below the data over on the left-hand side, the chart with the light green background, is a column chart, probably the most common chart that we see in Excel for many users. Off to the right, orange background, we see a line chart. Many people consider line charts the best kind of charts if you're trying to show a trend, or maybe the lack of a trend, across a time period. So nearly always when you see a line chart, you're going to see across the bottom some time reference.

For example, in this case, months, sometimes years, quarters, whatever. Off to the right, we see a pie chart. Now it's colorful, but it's very limited in the sense that it usually can only show a single row or a single column of data. Often used for a situation like this, where you're trying to show how the pieces fit together. So the question comes up at different times, what chart is best for my data? And becoming familiar with some of these chart types is probably the first step in that process. Now, the pink chart just to the right of the green chart right here is a 3D-column chart.

It's pretty colorful, but on the other hand, it isn't always the easiest of charts to read, and perhaps it's less common than some of the others that we're seeing here. Off to the right, the chart with the purple background is referred to as a bar chart. Now, novices in Excel often call a column chart a bar chart, but there is a difference, and the main difference, of course, is a 90 degree rotation. This purple chart is simply like a column chart rotated 90 degrees, and we call it a bar chart. And below this we see some variations on a column chart, and off to the left, another column chart.

The next sheet over, column chart, again, showing us some variations on different kinds of column charts. Because this is widely used, you often don't have to spend too much time explaining how to read a chart like this. Same thing is true with line charts. The next sheet over shows us a line chart with only one series, one set of data here. And there's a pie chart off to the right again. A three-dimensional pie chart on top, two-dimensional pie chart below that. Again, colorful, but somewhat limited in the amount of data it can show. Next sheet over, bar chart.

And again, remember, just a variation on column charts, and you can imagine at different times, wanting to use one of these chart types or another. They're all very colorful, and by the way, easy to change, don't get too hung up on that just yet, and you'll see in later movies how easy it is to change the general appearance of these charts. Now, to a lesser extent, some of the other chart types you want to become familiar with. Next sheet over is called an area chart. Now, this could be somewhat like a line chart, but it suggests, perhaps more than a line chart would, volume, so depending upon what's being shown here, this could be better than a line chart.

Next sheet over is a scatter chart. Perhaps not as widely used as some of the others. This is showing the participants in a race, a 10K race, based on age and time, and there's a general trend, and you probably would have guessed this one, the older you become, the slower you become, at least in general as we look at these race results here. Combo, this is an unusual chart type, but it's easily available in Excel, and easily created for data when you've got a divergence of values. First glance at this might not be obvious, but a quick look, eventually you come to realize, the columns refer to the data along the left axis, the vertical axis, that's called the primary axis, and off to the right, we see another axis.

Different scaling there that relates to the line here, that's the miles per gallon. Some newer chart types introduced in Excel 2016 you might not be familiar with yet. Tree map chart, that shows us the break up based on volume here, relative size of the rectangles. Sunburst is another variation on that same idea. A waterfall chart, another chart type out here. A histogram, without descriptions here. Pareto chart, showing us different variations on how we can display the data. If you only use charting occasionally, you want to stick to what we might call the big four: Column charts, line charts, pie charts, bar charts.

You see these frequently in newspapers, magazines, on television, and usually, you don't have to spend too much time explaining how to read them. And that's always something to be thinking about, particularly if you make presentations of charts. If you find yourself spending a lot of time explaining how to read the chart, it probably isn't the best chart type. So becoming familiar with these chart types is really helpful as you consider how to best display your data.

1/17/2019
Learn the basics of Excel charts and graphs in this concise course. Excel expert Dennis Taylor begins by explaining Excel chart concepts, including identifying the different elements of a chart and choosing the right chart type. Next, Dennis walks through creating a basic chart, using the Recommended Charts feature and keyboard shortcuts to get the job done quickly. Dennis then covers formatting charts with styles, colors, and more. Finally, he steps through the most popular chart options: column, bar, and line charts. Note that this course is recorded in Excel for Office 365 but anyone using a recent version—including 2019, 2016, and 2013—will be able to follow along.
Topics include: