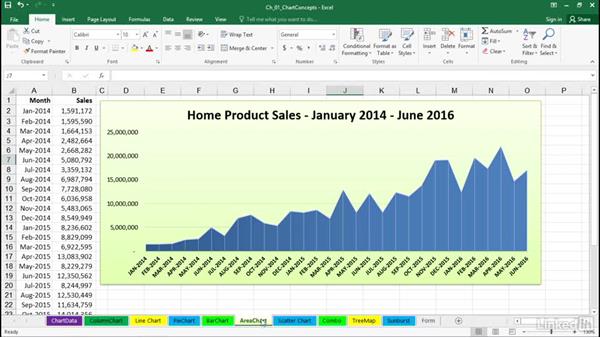 - Because there are so many chart types in Excel. It's not always clear which chart is going to work best for the data that you're trying to depict. Not all chart types are equally effective in showing the data in a meaningful way. In this worksheet called Chart Data, below the data we have probably the most common kind of chart in Excel. A clustered column chart. To the right of that you'll see a line chart. Most people agree that a line chart tends to be best for showing a trend or maybe the lack of a trend. Column charts may be a little bit better at showing volume.

They're different kinds of column charts. To the right here we see a 3D column chart. In fact, every chart on this worksheet is based on the same data. Pie chart, by the way. Cannot show as many layers of data. If you look over in row five, we are seeing domestic data but not data for the other three countries. It's got some limitations. Nevertheless, for certain kinds of data. This might be the best visual to accompany your data. On the next sheet over, we see some other column charts. A stacked column chart just below the data, other kinds of column charts there.

It's generally agreed that column charts are fairly adept at showing volume. A bar chart a few sheets to the right, we see the same kind of information but rotated 90 degrees. Moving back a few sheets, a line chart. Here's a bigger example of a line chart showing a trend over period of time despite the erratic nature of the data. A generally upward trend there. Here's some more examples of a pie chart on this sheet here. Three-dimensional pie chart up above. A two-dimensional pie chart below.

Also, an area chart. Sort of a variational aligned chart. Perhaps this suggest volume a little bit better than a line chart. And there are other specialized kinds of charts in Excel as well too. A scattered chart here. You can see pretty quickly what's going on. We're comparing the ages and times based on participants in a race. We see how that's breaking out. And there's a trend line in there also to suggest the older you get, the longer it's going to take. And I think we all knew that anyway, didn't we? There are combo charts, where we can pull together data of, quite a bit difference in magnitude here.

Miles versus miles per gallon. We've got two axes there. One on the left side, one on the right side. And there are other specialized charts. A new chart in Excel 2016 is called a Treemap. And you can pretty quickly figure out what's going on here. We've got various hierarchical relationships showing up in this chart. And also, sunburst, another new kind of chart that shows that same relationship in a different way. And so, as you create charts in Excel, if you only use the feature occasionally I think it's a good idea.

Stick with what we might call, The Big Four. Column charts. Line charts. Bar charts. Pie charts. We see them all the time. You don't want to get involved too much in describing a chart and how it's to be read. If you find yourself spending way too much time explaining how to read a chart. It's probably not the best kind of chart. And because it's so easy to change chart types. You'll do it readily. All you need to do is click the chart and in the Design tab up in the ribbon, off to the right you'll see a choice, "Change Chart Type".

Maybe I want this chart to be a bar chart. Here's some bar chart options. I like this one. Double-click. We've made a change. And because you can do that so easily and you'll learn more about this in subsequent movies. You won't hesitate to consider the different ways that you could be depicting your data by exploring the different chart types in Excel.