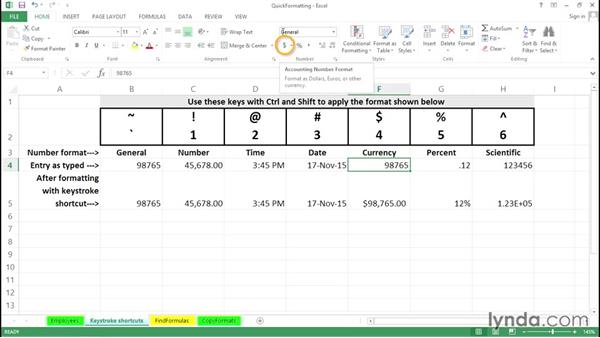 - Excel has a number of keystroke shortcuts related to formatting. Certainly widely known by a lot of Excel users is ctrl + b for bold and as we look at these on the Home tab on the ribbon, we see the keystroke shortcut referred to here. And of course there are other features that we use in formatting that are not so well known. They've got keystroke shortcuts too. For example, strikethrough. When someone leaves this organization, we don't delete the information about that person for a while. We simply indicate that the person has left by using the formatting feature, strikethrough.

This has no impact whatsoever on content, simply ctrl + 5 applies this feature. This is what we also call a toggle. ctrl + 5 removes it. In a different worksheet here, I want to highlight this data here, not by using color, but I wanna put a border on it. And anytime you wanna simple perimeter border, you can use the keystroke shortcut, ctrl + shift + 7. If you are familiar with border features, you know that sometimes when you apply the features, you don't actually see them until you deselect the data.

That has been applied. There's a border around those cells. We won't see it until we click outside the cells. There we are, now we see it. Now in a different worksheet here, we've got border features in effect, here. We've got some different kinds off to the right and another one below and so on. We might want to remove all border features. I might zoom back, we've got some others here. We could do the entire worksheet or maybe just some of them. Highlight the relevant cells or maybe the entire worksheet. Maybe we wanna get rid of just these border features here.

All border features are gone. So applying a simple perimeter border, ctrl + shift + 7. To remove all border features, ctrl + shift + -. Now on a different worksheet here, we've got some keystroke shortcut listed for various numeric formats. And these shortcuts have something in common in that they're located next to each other on the keyboard. So from left to right, on the top row of your keyboard, just below the function keys, you're likely to see these keys right here. That first on one some keyboards maybe you won't see.

The one with the tilde and the accent grave. But most keyboards, you'll see these in order this way, with their symbols. And at different times, it's fast to use these for formatting numbers. Now general format, most people don't use that often other than fact it is the native format of Excel but usually we're moving away from general format. But if you ever need to have a series of numbers re-displayed in general format, you simply can highlight them and press ctrl + shift and use this key right here.

We've got our data highlighted, ctrl + shift + # or ctrl + shift + 3. And similarly over here with currency. Now, I need to point out here that there is a difference between the dollar sign, as we see it here, and we're about to apply currency format, that's different than the dollar sign that we see on the Home tab in the Number group. This applies a counting number format. So I'm going to use it first to see the display. Now if I use ctrl + shift + $, there'll be some differences here.

Keep an eye on this. ctrl + shift + $. The dollar sign moves next to the number instead of hugging the left side of the cell. Also when you're using negatives, you might get a different display. So, without going into great detail, when you're using the dollar sign for display, you might use currency format and it's gotta keystroke shortcut, ctrl + shift + $ or you might be using the dollar sign feature here that applies a counting number format. But just make sure that you're consistent about what it is you're applying to cells in the same general area.

So all these keystroke shortcuts again use ctrl + shift and then any of the various keys that are right next to each other across the top row of the keyboard. There's a new function actually in Excel 2013 called ISFORMULA and it's gonna be really helpful in this worksheet. Let me first of all point out that if you click on the single cell in a worksheet like this and you say to yourself, I'd like to highlight all of the formula cells, from the Home tab you could easily click the far right button, Find & Select, and choose Formulas.

And you could apply a color, say yellow right here from the fill color bucket. That's good but it's not dynamic. So for example, if I click this cell and press delete, the formula's gone but the yellow stays. If I write a new formula here, a simple formula that simply takes this times two. I've got a formula there but it didn't turn yellow. So those two changes are not dynamic. Let's remove the color here. I'll simply press ctrl + z to get rid of the color. The new function is called ISFORMULA and we can use this in combination with conditional format to set up what might be called dynamic conditional formatting with formulas.

I'm gonna select the entire worksheet. That makes the active cell be A1. I'll go to Conditional Formatting, create a new rule and use a formula to determine which cells to format and that formula will be as follows: =ISFORMULA. You don't have to capitalize this as you type it. I'm doing it for readability. =ISFORMULA(A1) Apply a format. I'll use bright yellow again as the background. We could use any combination of different formatting features.

Click OK. Now in contrast to the previous approach, this is dynamic. So if I delete the content of this cell, it's no longer yellow. If I click here and write a formula, like I did before, it will become yellow as soon as I complete it and turn it into a formula. The function being applied here is a new function available only in Excel 2013. Conditional Formatting. Now viewing it again, we'll go back, not to create a new rule, but to manage an existing rule. And there it is right there.

We can edit the rule to re-display it. =ISFORMULA(A1) Even though we only refer to cell A1, it automatically applies the format to the entire worksheet since we've selected it all. So we're applying a yellow format anytime a cell has formula. That allows us to keep a good eye on this particular worksheet and as we make adjustments to it, maybe it's dynamic, we're adding new formulas all the time and adjusting it and so on. Changing things, we want this to be up to date so the new feature helps a lot. So we've seen quite a few different formatting tips in this particular presentation.