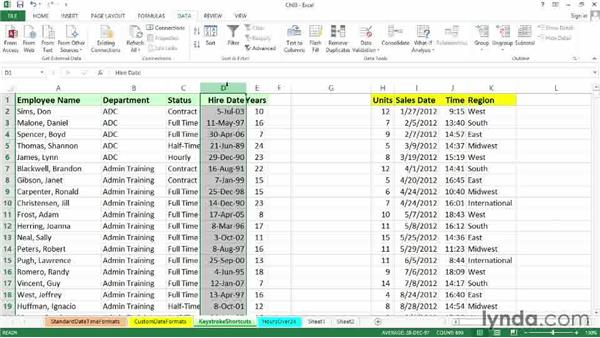 Excel has well over 100 keystroke shortcuts, and a number of them are applied to formatting. But, when it comes to date and time, there's only one particular keystroke shortcut for date and one for time, either of which you might find handy. In column D we see the higher dates being depicted in a more or less standard way, at least in the United States. There is some doubt sometimes, particularly if you work with data from other sources, other countries, possibly, is that July 5th, 7/5 or is that May 7th? Now looking at the other data you can quickly surmise what's going on here.

But if you'd like to eliminate the doubt that sometimes occurs when you're dealing with date data, you can use the keystroke shortcut, the only one for dates. It's Ctrl+Shift+#. Now you could also phrase it as Ctrl+Shift+3. We're using the same key there. This does display a three character month so there's no doubt as to which month we're talking about here. And usually it does not take up a whole lot more space horizontally. That's the concern sometimes. And so at a glance here we know immediately which month this is. The day is to the left. The year is to the right.

So that could certainly be handy. By the way, that's not a toggle. If we press it again it doesn't remove the particular format. It just keeps it as is. If you're working with times, Column J has the 24-hour style which is common in other parts of the world, but not so much in the United States. Some airline schedules are using this, but a lot are not. And if we like to change this into an AM PM display, the one keystroke shortcut associated with time is [email protected] or Ctrl+Shift+2 either one, same key, and in this case gotta make the column wider, double-click that right boundary and there we are.

So [email protected] And you might remember that with the simple concept of, I'll meet you at three o'clock. So maybe we're thinking of time as we use that. Nevertheless, that kind of a display is fairly standard in the United States, and certainly it is used elsewhere, too. But, the one keystroke shortcut for time's, [email protected] And earlier as we saw in column D, one keystroke shortcut for dates, Ctrl+Shift+#.