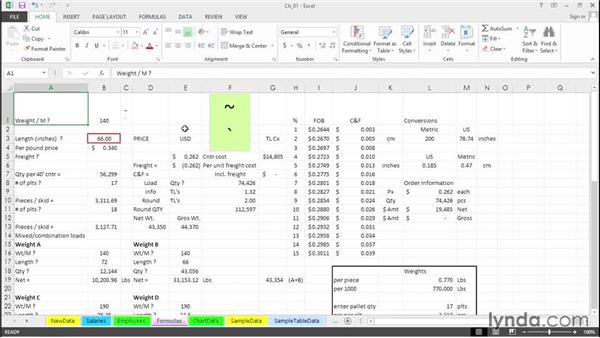 Join Dennis Taylor for an in-depth discussion in this video Instantly display all worksheet formulas, part of Excel 2013 Tips and Tricks.

In any worksheet, if you're trying to figure out where the formulas are, it's not always an easy task. And in this worksheet which is poorly designed, it's called formulas, there are quite a few formulas in it. It would be great if we could see all those formulas at once and we can. Depicted in this green box is a key usually found on most keyboards in the upper left corner, typically above the tab, below the escape key, to the left of the number one key. On some laptops you might find it in the upper right corner. The upper symbol is usually referred to tilde. The other symbol, different people refer to it in different ways.

A lot of books call it accent grave. The point is, and without using the shift key, if we press Control with this key, and I'll call it Control+tilde, instantly we see on the screen all formulas wherever they exist, for example in cell B7, D13, E13, et cetera, and certainly a lot of other cells here, we can see the formulas instantly. This feature is also called a toggle switch because if we press Control+tilde again, remember no shift key, we go back to a normal display.

It's a great troubleshooting tool. I use it frequently when I'm looking at worksheets trying to figure out what's going on. Doesn't solve all of our problems, but it certainly gives us a headstart in figuring out what's going on. It's not a bad idea too, at times, to actually print the worksheet in its current form. And when you do that too, you might want to consider printing the column letters and the row numbers. Notice that Control+tilde also doubles the width of columns or when we return to normal we're back to this width. So along the way it gives us a visual cue there.

So anytime you're looking at a worksheet and you see a bunch of formulas, perhaps someone sent it to you in this form. Control+tilde. And by the way, there is a corresponding shortcut, it's listed on the formulas tab in the ribbon and there we see it right out there to the right in the formula auditing group called show formulas. As you slide over that, by the way, the pop-up tip actually refers to the other symbol, and it's barely visible, show formulas, Control+, and they refer to that other symbol, that accent grave. Think of it as Control+tilde or whatever you want to call it, but it's a great tool for worksheet troubleshooting.

It exposes all formulas, as we double the width of all columns, or we return to normal with the same combination.

7/16/2014
Increase your Excel productivity with the power user tips and tricks packed into this fast-paced course. Dennis Taylor will show you how to create formulas quickly, split data into columns, apply formatting, build charts, and fast-track routine data-entry chores. Short on time? Make sure to check out the "Top Ten Shortcuts" and "Ten Tiny Tips" chapters for a quick productivity boost. Start now and get an immediate return on your investment, with powerful techniques that will save you hours every week.
Topics include: