Familiarizing yourself with functions and formulas 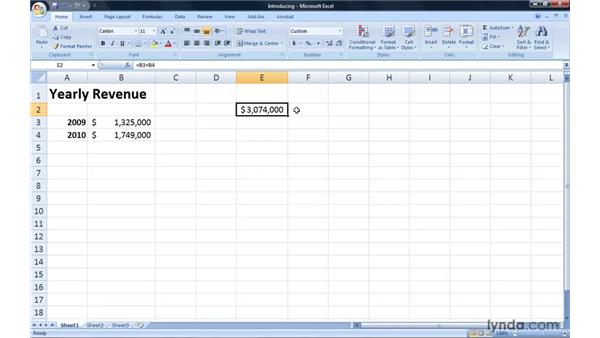 Join Curt Frye for an in-depth discussion in this video Familiarizing yourself with functions and formulas, part of Excel 2007: Introduction to Formulas and Functions.

Many Excel commentators, myself included, tend to use the terms function and formula as if they meant the same thing. In fact, functions and formulas are quite distinct. In this lesson, I'll describe the difference between formulas and functions and show you how both work to help you summarize your data. A formula is a statement you enter into an Excel worksheet cell that calculates a value. In Excel, you always begin a formula by typing an equal sign. When you do, Excel knows that it is to treat the rest of the text you type into the cell is part of the formula.

As an example, you can click a cell on your worksheet, type = 1+2, press Enter, and get the result of 3. You can also refer to worksheet cells in a formula. In this worksheet for example I have values and cells B3 and B4 which represent revenue for the years 2009 and 2010. If you want to find the sum of the values in those two cells, you could type =B3+B4, press Enter and you get the result.

A worksheet cell displays the formula's result, but if you click the cell and look at the Formula Bar, which is just above the regular worksheet grid, you can see the text of the formula. Now, let's say that you want to perform a slightly more advanced calculation such as finding the average of the two values in cells B3 and B4. The long way to do that would be to type a formula in cell E2 such as =(B3+B4)/2 and what this does is it adds the two values in B3 and B4 and then divides it by 2, which is the number of values.

When you press Enter, you'll see the average. The problem with this approach is that it takes a long time to type in those formulas and it's really only practical to create formulas by hand from very simple mathematical operations. In many cases, it's much easier to use functions. A function is a built-in set of steps or algorithm that Excel can follow to find a result. To find the average of the values in cell B3 and B4 for example, I could type in an equal sign and then start typing the name of the Average function and press a left parenthesis.

Now that I've pressed a left parenthesis, I can indicate which cells contain the values I want to add. Those cells are B3 to B4. When I type a colon it indicates to Excel that I'm defining a cell range. I'll talk about that more later on in this chapter in lesson 4, Using Cell References and Formulas. After you enter the cell references, you can type the right parenthesis and press Enter to end the function and you get the result. Now it's the same result as before, but you didn't have to remember how to compute an average or count the number values you were averaging.

Now that you understand how functions and formulas work in Excel, you can dive into the main body of the course and start creating your own formulas.

11/11/2009
Excel 2007: Introduction to Formulas and Functions shows how to build impressive spreadsheets with the application's built-in capabilities. Excel expert and Microsoft Most Valuable Professional Curt Frye shares his vast knowledge of Excel, demonstrating how to build various arithmetic and statistical analysis formulas. Curt explains how to summarize values in sets of cells, create conditional formulas using IF and other related functions, and use validation rules to make data entry more accurate. He even teaches how to search for data within a list or table using the VLOOKUP and HLOOKUP functions. Exercise files accompany this course.
Topics include:

Video: Familiarizing yourself with functions and formulas