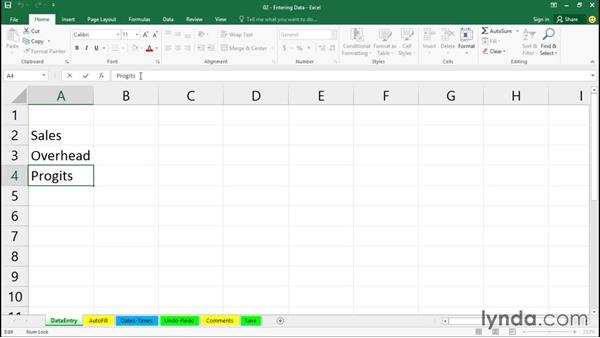 - Data entry is one of the most basic things we do in Excel, and yet there are some rules, some concepts, that you should become familiar with. In this worksheet called Data Entry, we're in the workbook called 02 - Entering Data, we're going to be creating a small worksheet consisting of about six months of data. And since we're not going to be using that many columns, I'm going to use the slider bar on the lower right-hand corner to zoom in. There's that icon roughly in the middle, slide in this way. That should be good enough.

I want to track sales, expenses, and profits so in cell A2, remember you can change the location of the active cell by using your arrow keys, or you can simply, by using the mouse, point, click on a different cell with the left mouse button. I'm going to type in the word Sales in cell A2. To complete an entry, we press enter to move the active cell downward or tab to move it rightward. You can also press any of the four arrow keys if you wish. I'm going to press enter, this moves the active cell into cell A3.

I'm going to type the word Expenses. As I'm typing it here, maybe I make a mistake and I catch it right away. I'll press the backspace key, not left arrow, but backspace. Now, maybe I've been working in Canada or Great Britain recently, I've typed it this way, and I realize oops that's not the way I want it. Now on second thought, maybe I don't want that there at all, I want the word overhead. Often in Excel, rather than erasing a cell, you simply replace it with something else.

So I'm going to type the word overhead, I don't have to delete what's already there. I'll type Overhead and enter. Now I'm going to type Profits. This time I'm going to make a mistake, but maybe I don't see it right away, I press enter. You can edit a cell or simply retype it. I could probably retype profits reasonably fast, but on the other hand, if you'd like to edit a cell, make it be the active cell. There are two approaches. You can click in the formula bar with the mouse and start typing or deleting whatever's needed for the moment.

Since I clicked right in front of the g, I could press delete, type in f, and press enter. You can also edit by double-clicking a cell. You want to be double-clicking near where the error occurred so I'm going to double-click right in front of, or right after the g in progits here, which should be profits of course. There we are. I'll delete the g, press f, and enter. Now, I'm going to put numbers in here for Sales and Overhead. I've got caps lock on, I'm about to type one, two, zero and I press O.

Now, o and zero are right next to each other on the keyboard maybe I'm not sensing anything wrong. I'm going to press the tab key here. Now I'm going to type 160, I will type it correctly, and press tab. Of course, right away, what are we seeing here on the screen? This is right-alined, but the one, two, o over here, which really is an o, is not. In Excel, if you type a number or a formula, it's automatically right-alined, every other kind of entry is left-alined. Later, if I don't catch this, I'm in trouble if I ever try to write a formula, that's not a number.

It's a one, two, o, therefore Excel alines it on the left. How do I fix it? 120 and I'll tab to the right and tab to the right. I'm going to fill this in with some numbers. Each time I'm going to be pressing tab as I fill in the remainder of the cells across for six different months, let's say the first six months for this business. As I get to the end, I'll simply press enter, and we're going to put in six more numbers right here. So basic data entry. Numbers are always right-alined and nearly always should stay that way.

Possible exception, if you using ID numbers or code numbers, you might want to have them centered. But we learned back in the 2nd grade, always line up numbers on the right before you add them, or subtract them, or multiply them. So again, each time as I'm putting in the numbers here, I'm tabbing to the right. So, basic data entry in Excel. Text entries are automatically left-alined, numbers are automatically right-alined. From time to time you may want to change the alinement of text, occasionally with numbers, although I strongly suggest against it except in the case of ID numbers.

Numbers are always lined up on the right, text on the left.

9/22/2015
Start mastering Excel, the world's most popular and powerful spreadsheet program, with Excel expert Dennis Taylor. Learn how to best enter and organize data, perform calculations with simple functions, work with multiple worksheets, format the appearance of your data and cells, and build charts and PivotTables. Other lessons cover the powerful IF, VLOOKUP, and COUNTIF family of functions; the Goal Seek, Solver, and other data analysis tools; and automating tasks with macros.
Topics include: