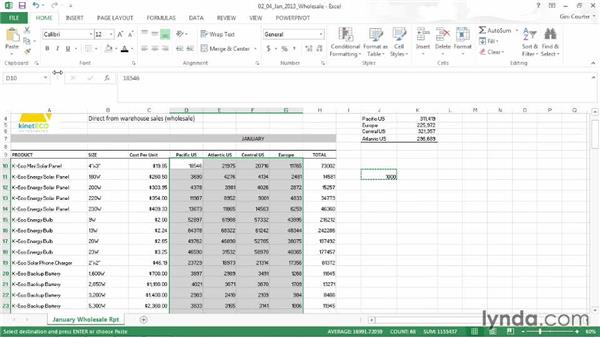 All of the numbers that we see here in this workbook are relatively large. They're sales numbers, so we have 18,000, 21,000, 20,000, and if we were looking at not the number of units sold but the actual sales in dollars, these numbers would be even larger yet. What I'd like to be able to do is take these numbers and make them smaller. So that rather than dealing with 18,546, we can deal with 18.

We can deal with three and four and two, and part of that is that when we're asking people to compare numbers, large numbers are just large numbers, they're really big. If we can make these bite sized numbers, then they're easier for people to think about. More people can imagine the difference between 18 and 25, than 18,000 and 25,000. So if it's appropriate to look at these numbers proportionately, we want to be able to divide them by thousands, and then we would simply note January all sales in thousands here.

Now let's go to Paste, Paste Special, Divide and say Okay. And when we do, all of our numbers are divided by the number I had copied to begin with. So you start by saying I'd like to divide by ten. 1,000, a million are more normal than ten. And then, after you've done that, you use Paste Special, Divide. And now I just need to remember to say okay, this is January, units in thousands.

And sometimes people will do that. Zero, zero, zero, so it makes sense. And I've lost part of my formatting here, so let's just go ahead and select that whole area again and go and turn on a top and bottom border just like that, that looks good. I don't need this thousand anymore, it was a moment in time, it's not like it was part of a formula, all of these cells were simply divided. So I can go ahead and take that thousand and drop it back out of here.

So that's how you take very large numbers, numbers in the thousands or the millions, and make them human manageable, bite size. One more thing, let's just go in and take care of these odd number of decimal places that we have here and simply say that what we'd like to have is one decimal. So we'll format that as a comma, and there's our thousands, units in thousands all the way across the board.

10/17/2013
Learn how to drive your Microsoft PowerPoint presentations with data straight from the source—Excel. Gini Courter first shows you how to use conditional formatting to highlight important data, summarize data with PivotTables, and visualize your data with sparklines and charts. Then learn how to leverage the linking and embedding features of Office to bring Excel tables and charts into PowerPoint. Gini then uses SmartArt to provide a conceptual framework in PowerPoint and animates the results. Finally, learn to create links from PowerPoint to Excel to fire up a workbook directly from a presentation. If you've wondered how to create compelling, data-driven presentations that always stay up to date, this course is for you.
Topics include: