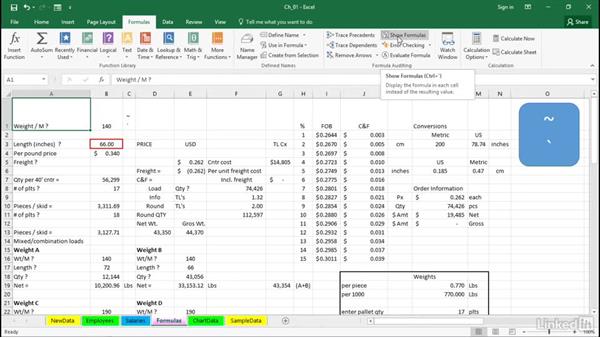 With the active cell anywhere in a worksheet, press Ctrl+~ (tilde) - do not use the Shift key. All column widths in the current worksheet are now twice as wide, and all formulas are displayed instead of their results. This shortcut acts as a toggle - press it again and the display returns to normal.

- [Voiceover] Here's a worksheet called Formulas. Imagine if you're just looking at this for the first time, you're trying to figure out what's going on. It's not well laid out. It's got some problems in terms of design and coherence. You're trying to figure out where the formulas are, and there is a great shortcut for exposing all formulas. It's by way of a keystroke shortcut. On the far right of the screen, you'll see a blue box showing what's on one of your keys. On most keyboards, you'll find this in the upper left-hand corner, usually between Escape and Tab, to the left of the number one key.

Now, symbol on top is usually called tilde, and the other symbol is called an accent grave like you see over certain letters in French. Nevertheless, that key is important, and without using the Shift key but using the Control key, if you press Control, I'm going to call the key tilde, Control + ~, watch what happens on the screen. All column widths are doubled, and more important, everywhere there's a formula, for example, over here in cell E5, we see the formula. Down here in cell E13, and just to the left, and so on.

All formulas are exposed. Now, the reason the widths of the column are doubled is to give you a better opportunity to see the formula. That's not foolproof because in some examples, maybe the formula's even wider than what we're seeing here, but it's a great tool for troubleshooting, and you don't want to keep it in this state, probably. Just press Control + ~ again. Now, this feature is the same as a button found on the Formulas tab in the ribbon. You'll see a button off to the right, Show Formulas. As you slide over that, the pop-up tip below it refers to that same key, but it refers to it in a different way, Control + `.

It's so tiny, and it's easily mistaken for the symbol that some people call apostrophe that's often two letters to the right of the letter L on most keyboards. Nevertheless, if you've figured out which key it is, and I think you have by now, probably, Control + ~ doubles the width of columns as it exposes formulas or brings us back to normal. And again, it's exactly the same as this button, the Show Formulas button. And when the worksheet is looking like this, you might want to consider printing this. Before doing that, you probably want to adjust all the column widths, and you can do this easily by clicking in the upper left corner and simply double-clicking any column boundary between the column letters.

For example, between columns A and B, I'll double-click. And let's get a quick print preview here with Control + F2. There we are. It's looking like that, and also, to make this more readable, too, we probably want to split it over two pages, but something else to consider is over on the left side at the bottom, you'll see Page Setup. Before printing this, you might want to go to the Sheet tab, show Gridlines and possibly, also, Row and column headings. Click OK. The view will change a bit. That probably will be readable enough.

If not, possibly, you'll split this over two pages, but it's a good source of documentation because we're seeing all the formulas here. Escape, we're right back into the screen again. So Control + ~. If we have readjusted the column widths for this particular process here of printing, then, when we press Control + ~ and go back to normal, now, our columns are probably not wide enough. So click in the upper left-hand corner again to select the entire worksheet, and once again, double-click a boundary between column letters to bring back the data. So a useful tool for seeing all formulas in a worksheet, Control + ~, or the Show Formulas button on the Formulas tab in the ribbon.

4/21/2016
Excel expert Dennis Taylor helps Excel 2016 users take their spreadsheet skills to the next level with this collection of tips and tricks. He begins with his top 10 productivity boosters, and then highlights navigation, display, and selection techniques to keep you moving quickly.

The course then dives into data entry and editing techniques, formatting and drag-and-drop tricks, keyboard shortcuts for working with formulas, data management strategies, and chart tricks. Short on time? Make sure to check out the "10 Tiny Tips" chapter for a quick productivity boost.
Topics include: